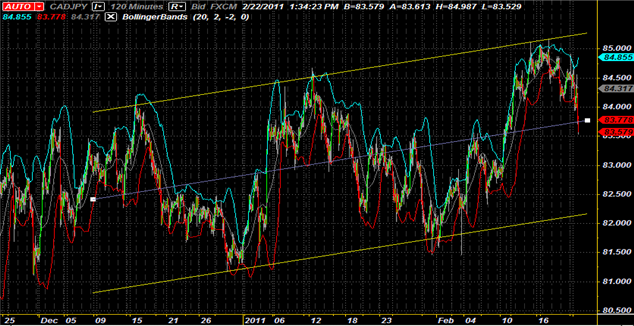 After declining for much of 2010, the CAD/JPY has seen a steady appreciation since late-October, rallying over 600-pips in the process. The appreciation has continued in the early part of 2011, with the first two months of the year market by a continuation of the ascending channel, albeit in a tighter range. Recently, 25- to 50-pip moves have been common place, as the CAD/JPY pair has touched both the range top and range bottom four times in the new year. Now, the CAD/JPY pair is coming off of its 2011 high set last week , and for the time being, with little event risk on the horizon for Australia or Japan, the pair is set to continue within its channel and provide scalping opportunities to traders.

The channel has held through the first two months of 2011, carving out a 350-pip range in the process. After hitting a low of just below 81.500 on February 3, the pair has since rallied to as high as a few pips over 85.000. The CAD/JPY pair, however, has since retraced its gains, falling over 120-pips in the process. While pressure remains to the downside, with the pair having completed its most recent leg-up in its channel, it appears that a slight correction upwards may be in order as the CAD/JPY pair has broken outside of the lower envelope of its Bollinger Bands. 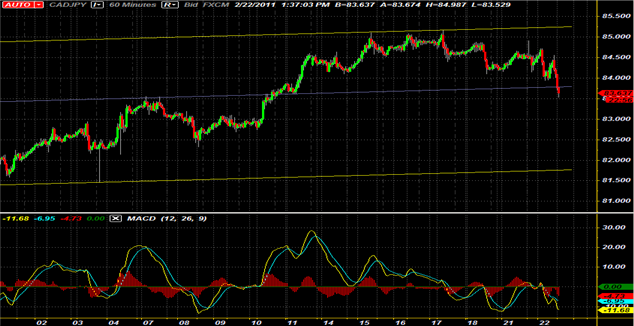 Looking at the 60-minute charts, the CAD/JPY is in a well-defined ascending channel, though since February 11, has been trading sideways. With the CAD/JPY pair approaching the range regression of the channel, the pair could rebound upwards. However, now that the pair has broken below its 23.6 Fibo at 84.125 on the daily chart, downside pressure remains as it tests its 38.2 Fibo. The pair remains well above its major moving averages, a clear sign that the overall momentum remains to the upside for the CAD/JPY. A bearish divergence on the MACD Histogram indicates that the pair is poised to potentially decline further over the next few hours.

Heading into the next few hours, with an ATR of 83 on the daily charts, it appears that there is room to scalp as the pair remains above its significant moving averages, while finding near-term support at the 38.2 Fibo. Now, having broken below the 23.6 Fibo, and the Slow Stochastic oscillator issuing a sell signal, momentum for the CAD/JPY pair is to the downside. 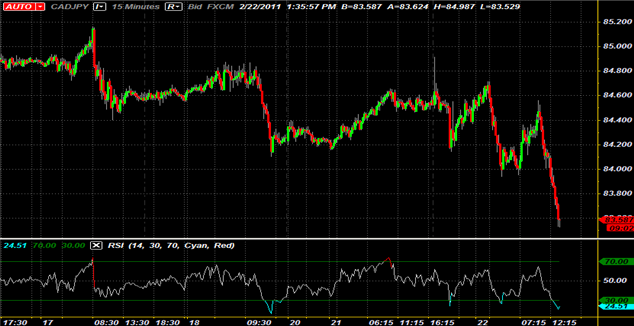 The docket is empty for Japan over the next few days, while Canada has some economic data due tomorrow – though it is generally not market moving. Accordingly, the CAD/JPY pair is expected to remain within its channel, as no significant event risk is expected. However, with rising tensions in the Middle East, traders may start buying the Loonie to expose themselves to any gains by oil in the coming days, putting upwards pressure on the CAD/JPY pair.