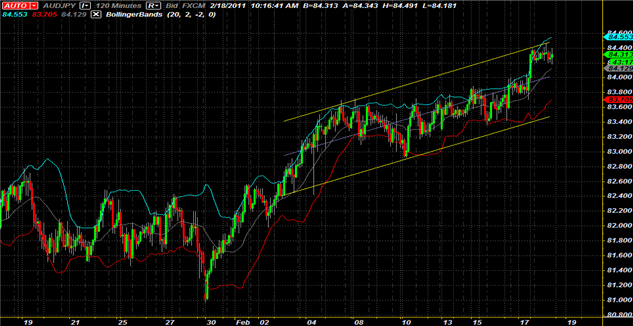 January was an extremely volatile month for the AUD/JPY pair, despite only trading in a 250-pip range during that time frame. The month was marked by a descending channel, with the pair touching both the range top and the range bottom a total of ten times; 20-40 pip moves were common. Now, the AUD/JPY is coming off of its 2011 high, and for the time being, with little event risk on the horizon for Australia or Japan, the pair is set to continue within its channel and provide scalping opportunities to traders.

February, however, has marked different fortunes for the Australian Dollar, as it has been the strongest currency month-to-date, save the Canadian Dollar. Accordingly, the Aussie has gained the most against the Yen, up 2.94 percent this month thus far. While the ascent has been fairly linear, slight pullbacks have occurred over the past two weeks. With the AUD/JPY pair now testing its upper envelope of the Bollinger Bands, as well as the upper range of its ascending channel, it appears that the pair may be in line for a decline. 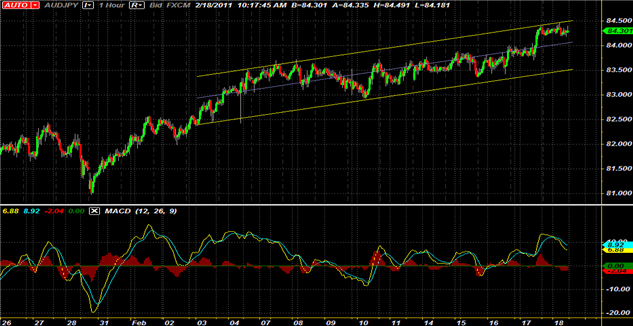 Looking at the 60-minute charts, the AUD/JPY is having trouble breaking through its last significant Fibonacci resistance of 76.4, at 84.424, seen on the daily chart. The pair remains well above its major moving averages, a clear sign that the overall momentum remains to the upside for the AUD/JPY. Nonetheless, a bearish divergence on the MACD Histogram indicates that the pair is poised to decline. The last time the AUD/JPY pair was at the top of its current channel under similar technical conditions, it declined nearly 100-pips.

Heading into the next few hours, with an ATR of 62 on the daily charts, it appears that there is room to scalp as the pair remains above its significant moving averages and below its 76.4 Fibo. Overall, bullish bias remains, but after appreciating sharply over the past few days, the AUD/JPY pair has hit significant overbought technical levels, indicating a decline may be in order. However, another test of the 76.4 Fibo at 84.424 – coinciding with the range top – may occur before the pair heads south in its current ascending channel. 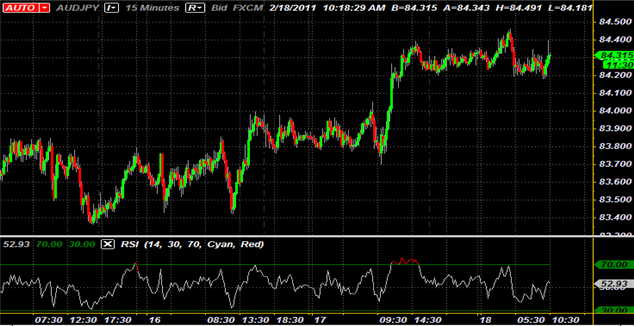 The docket is empty for both Australia and Japan over the next few days, with little economic data due out for any country in the region. After another surprise rate hike by China today, it is unlikely that further unforeseen events will occur over the next few days, removing the possibility that a breakout may occur. However, given the carry trade nature of the AUD/JPY pair, it should be noted that the general trend of appreciation is still expected to continue for the time being.