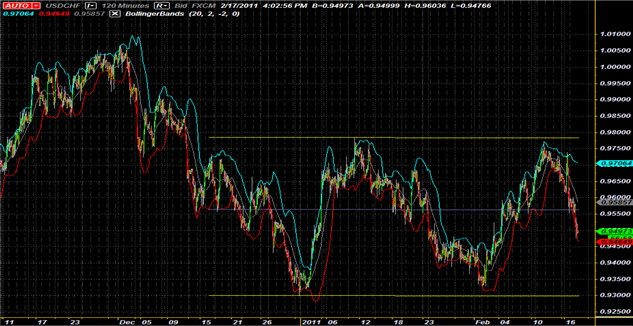 After declining steadily since May 2010, the USD/CHF pair has slowed the rate of its descent and has consolidated in a 500-pip range over the past three months. The pair fell as low as 0.9300 during this time frame, but has since rebounded to within two cents of parity. With recent news that the Swiss government would start supporting exporters as margins have thinned out due to a strong Franc, opposing pairs could see an appreciation against Europe’s safe haven currency as the Swiss National Bank moves to undercut their currency. However, until intervention rumors become realities, the USD/CHF is forecast to remain within its sideways channel amid a trading period of little fundamental risk.

Since December 9, the USD/CFH pair has been trading in a tight 500-pip range, touching just below 0.9800 twice and just above 0.9300 twice during this time frame. The most recent move, as noted on the 120-minute chart, is another leg down. However, as the USD/CHF pair has now broken outside of the lower envelope of its Bollinger Bands, it appears that a slight correction may be in order back towards the sideways channel’s regression trend line. 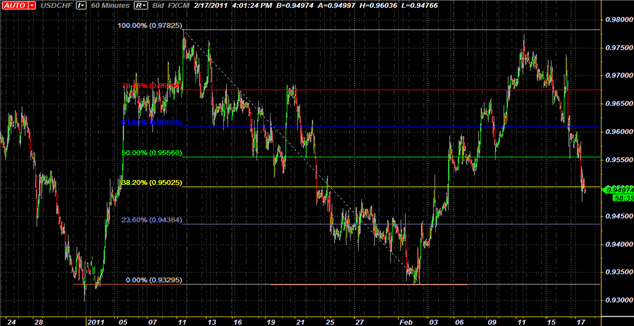 Looking at the 60-minute charts, the USD/CHF pair is hitting strong resistance at the 38.2 Fibo on the January 11 to February 2 move. Accordingly, after falling nearly 300-pips in just over a week, the pair is reaching oversold conditions on the 60-minute chart. With an RSI now at 26, the USD/CHF could rebound. As the MACD Histogram narrows, moving from a strong bearish signal towards a bullish divergence, the Slow Stochastics are expected to also issue a buy signal; the differential between the %K and %D has narrowed significantly over the past twelve hours. Thus, downside pressure remains, but a correction may be in order in the near-future.

Heading into the next few hours, with an ATR of 111 on the daily charts, it appears that there is room to scalp as the pair remains below its 20-SMA, as a rebound may be in order. The pair, however, has bearish bias overall, as both short-term SMA – the 5-SMA and 20-SMA – have moved lower than the long-term SMA. With that said, a test of the 20-SMA could occur if the USD/CHF pair breaks back through its 23.6 Fibo at 0.95122. 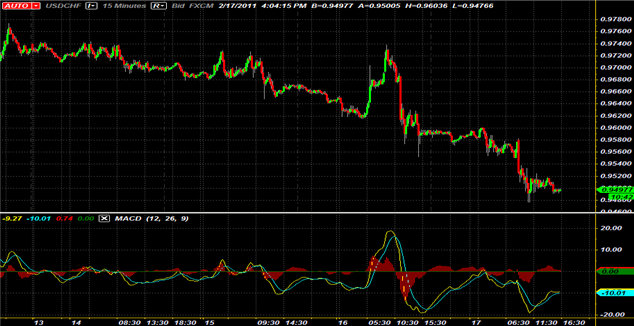 The docket is empty for both the United States and Switzerland for the next few trading days, with no information due tomorrow, and a federal holiday in the United States on Monday. With that said, as the U.S. Dollar has served as an “anti-Euro” sentiment trade, and the Swiss Franc has served as a safe haven from risk, any significant news from the Euro-zone could indirectly affect the USD/CHF pair.