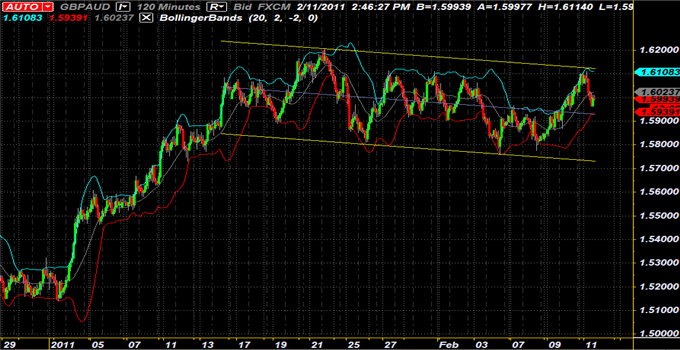 After climbing 1000-pips in three weeks to start the new year, the GBP/AUD has hit some resistance and has fallen back from the 1.6200 area to trade just below 1.6000. Entrenched in a descending channel since January 14, however, the GBP/AUD appears ready to remain within this channel on light economic data over the next few days, as many of the other majors have significant data releases early in the week. Accordingly, after touching the top of the channel earlier in today’s session, long-term momentum indicators suggest that the pair will move south once more in order to correct its massive gains in the beginning of the year.

The GBP/AUD pair has been in a slight descending channel since January 14, after starting the year with nine consecutive sessions of appreciation. After touching the 1.6200 mark for the first time since late November, the GBP/AUD has trimmed approximately 200-pips, though swinging as low as 1.5800 in the process. The pair, however, is currently has a comfortable 30-pip cushion between its next significant level of support, the 20-SMA; thus exists the opportunity to scalp some profit on any moves towards the range top or the 20-SMA on the downside. 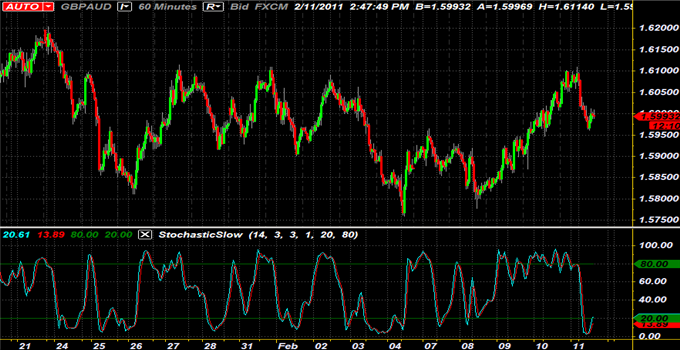 Looking at the 60-minute charts, the descending channel, while much less well-defined, does show that the pair has the ability to move quickly in favor of the Pound or in favor of the Aussie. That said, it appears that the pair, after testing the upperbound of its descending channel earlier in today’s session, is likely to try and test the range again, as bullish momentum appears to be gaining as the %K has crossed the %D of the Slow Stochastic indicator. Trading to the upside using the Slow Stochastic indicator on the 60-minute charts has resulted in gains between 20- and 50-pips in a short time span.

Heading into the next few hours, with an ATR of 170 on the daily charts, it appears that there is room for the GBP/AUD pair to test both its range top and 100-SMA. Currently, the pair sits above its 100-SMA, with the next level of resistance the range top. The pair could touch the range top before continuing lower, as longer-term metrics point towards a correction of the GBP/AUD’s nearly 800-pip rally this year so far. The quantitative metrics indicate that the next significant level of support for the GBP/AUD pair is between 1.59391 and 1.59357, currently the lower Bollinger Band and the 61.8 Fib retracement, respectively. 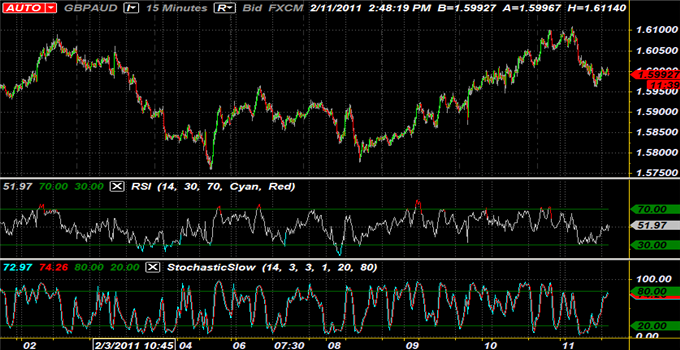 The docket is empty for both Britain and Australia over the next few days, eliminating the chance of a breakout either way for the pair. However, significant event risk is on the horizon for many of the other G-7 countries, including the Euro-zone, Japan, and New Zealand. Accordingly, should data surprise and disappoint investors, those exposed to the GBP/AUD could see increased volatility as traders seek haven from the Euro, Yen, or Kiwi.