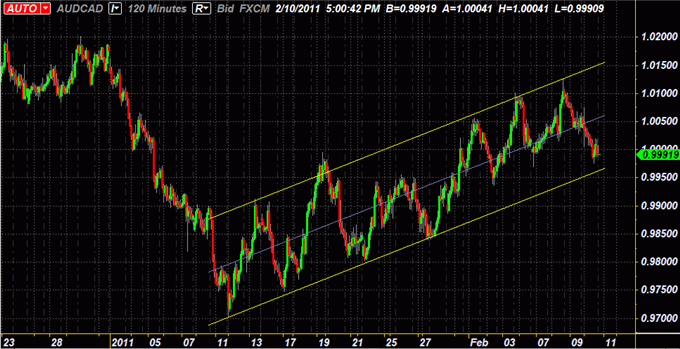 After falling to its lowest level since mid-September on January 12, the AUD/CAD pair has been in a well-defined ascending channel, marked by major volatility. It has touched both the upper and lower ranges of this channel a combined nine distinct times over the past month, making it an ideal candidate to capture pips. However, with little event risk on the horizon for the pair, little chance of a breakout exists, further supporting the notion that the AUD/CAD will continue to adhere to its current trend. Now, the pair appears poised to test the lower range of the channel, before continuing its climb higher once again.

The AUD/CAD has been in an ascending channel since January 12, when it reached its lowest level since the middle of September. Since then, however, the pair has been marked both swings up and down, trading in over a 400-pip range over the past four weeks. Many of these rallies have been marked by fundamental data; now, without a fundamental catalyst, technical levels are likely to be adhered to until the next significant data release. The pair is trading between its 61.8 Fib and 50.0 Fib retracements, finding significant support at both the 50-SMA and 100-SMA, at 0.99789 and 0.99840, respectively. A break below these levels exposes the 20-SMA and 50.0 Fib retracement, between 0.99500 and 0.99490. 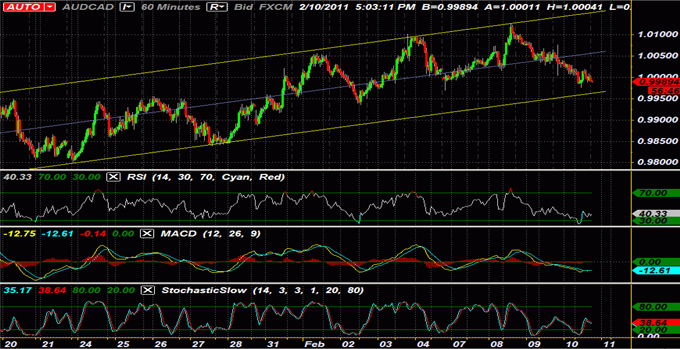 Looking at the 60-minute charts, the ascending channel is much better defined. The pair is trading off of an oversold signal on the RSI, suggesting upside momentum; however, the pair has yet to break upwards, and with the MACD Histogram remaining negative while the Slow Stochastic indicator issuing a continued sell signal, it appears that downside momentum has yet to run out of steam, and a test of the lower range is on the horizon.

Heading into the next few hours, with an ATR of 90 on the daily charts, it appears that there is room for the AUD/CAD pair to test both its 61.8 Fib and 50.0 Fib retracements. However, given the technical indicators signaling downside momentum for the time being, bias to the downside remains. Since midday today, the AUD/CAD has been trending lower, and has yet to make a concerted effort to push higher once more. The MACD Histogram on the 15-minute charts confirms this sentiment, showing little momentum to the upside; the bearish divergence remains in place for the time being. As such, there exists significant opportunity to scalp profits between the 61.8 Fib and the 50.0 Fib, as the AUD/CAD will have to clear its 20-SMA, 50-SMA, and 100-SMA on the way down. 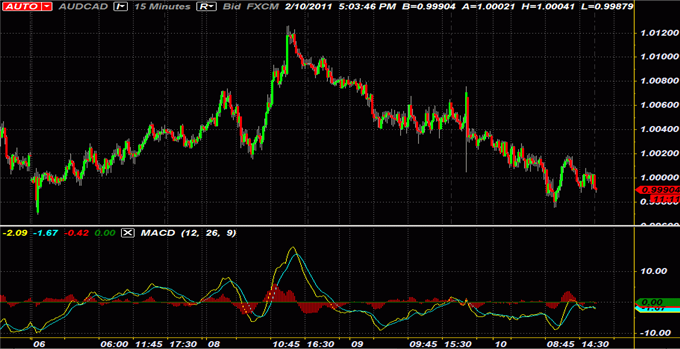 The docket is empty for both Australia and Canada over the next few days, eliminating the chance that a scheduled data release will provide any event risk for the potential of a breakout for the AUD/CAD pair. However, significant data will be released Tuesday, when the RBA will release the minutes of their most recent meeting. Until then, barring unforeseen news, the AUD/CAD is expected to hold its range.