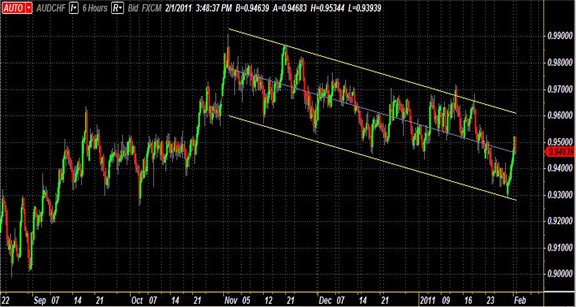 The AUD/CHF pair has been in a chopping descending channel dating back to late October, with the pair touching the range top and range bottom multiple times on its way to its current level, 0.94640. Commentary early today by RBA officials provided the fundamental boost needed for the AUD/CHF pair to rebound off of a resistance area between 0.93000 and 0.93500, a level tested but never been closed below since early September. With little in terms of economic data expected from either Australian or Switzerland over the next 36 hours, volatility onset by a strong fundamental presence is likely to be limited, setting up a swing trade within the three month channel the AUD/CHF has formed.

The broader picture on intraday charts, starting with the 6-hour chart, is that, despite some tests of the upper bonds of the range, the AUD/CHF pair has been in a descending channel for the over 12-weeks now. The pair is expected to continue within this range for the foreseeable future, as deteriorating economic conditions in Australia as well as speculation that the Franc could be used as a safe-haven currency against a depreciating Euro limit the upside for the AUD/CHF. With the 20-SMA moving below the 50- and 100-SMA on daily charts, downside potential for the pair exists. 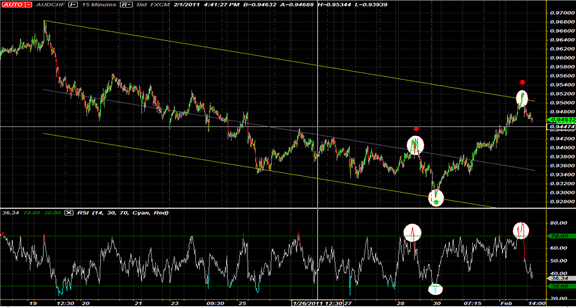 The AUD/CHF’s Slow Stochastic Oscillators on the 1-hour candlestick chart have crossed, with the %K at 41 and %D at 55, signaling a sell signal overall in the next few hours. The RSI is also rising, currently at 58, signaling additional strength in the near-term as it the pair is coming off of recently overbought levels earlier in today’s session following the RBA commentary. On the 15-minute chart, a clear channel has formed dating back to mid-January, and over the past week, buying and selling on overbought and oversold RSI levels has proven profitable. The 15-minute chart shows the RSI falling back towards oversold levels (signaling a buy), though chasing profits here is unadvisable. Accordingly, scalping 20 pips on an oversold RSI on the 15-minute AUD/CHF charts appears to manageable; the overall trend remains bearish for the AUD/CHF pair, however. 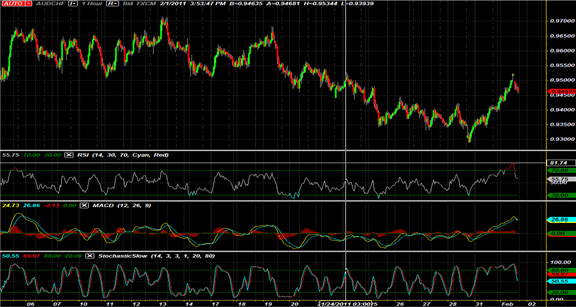 The 0.93000-0.93500 area, dating back to early September, proved to be strong support for the AUD/CHF, which promptly rebounded on RBA commentary following their decision to maintain the overnight cash rate at its current level of 4.75 percent. Nevertheless, with no market moving data coming out of Australia or Switzerland for the next 36 hours, volatility is expected to be lower with no fundamental catalysts on the horizon.