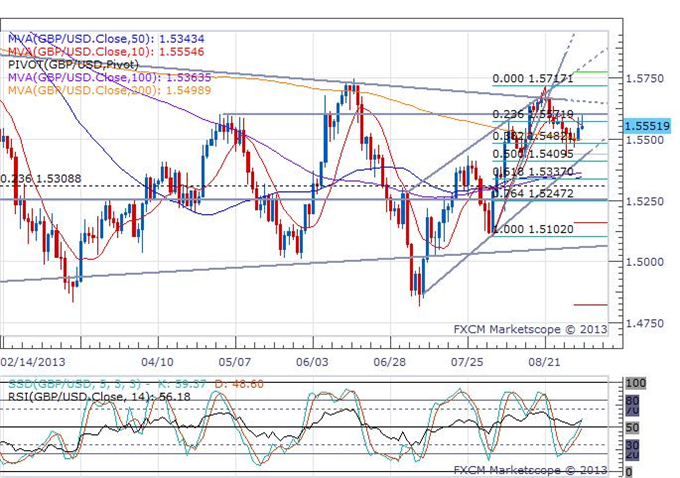 Syria Worries Wear Off, But Pound Higher Ahead of the BoE Meeting

The biggest story of the European session was the Russian Defense Ministry’s identification of missiles that were launched from the Mediterranean Sea in the direction of the Middle East. However, the story ended up only slightly affecting Forex markets, as a decline in risk correlated assets was quickly erased with further news developments.

Despite initially denying involvement in the missile launch, Israel said it was working with the United States on a test launch of its anti-missile defense system. The timing of the today’s falsely speculated US attack on Syria was precarious, as President Obama said he is waiting for congressional approval before striking Syria.

In economic news, the Australian Dollar soared at the beginning of the European session on a slight change of tone in the release following the RBA’s rate decision. In the United Kingdom, the construction Purchasing Managers’ Index for August beat expectations at 59.1, the best index result since 2007. The better than expected PMI release temporarily drove GBP/USD as high as 1.5600, as it is especially important in the days leading up to BoE monthly policy meeting on Thursday.

In other economic news, Swiss GDP for the second quarter slightly beat expectations by expanding 0.5% on a quarterly basis, but was still down from the 0.6% economic growth in Q1. There was little Swiss Franc reaction to the release, although the European safe-haven currency did temporarily benefit from the missile launch headline.

Out of Germany, Chancellor Merkel spoke at an election campaign event and said that she defends the Euro because it is good for Germany. However, she also said that pooling Euro debt won’t happen with her government. In an optimistic tone, Finance Minister Schaeuble said the Greek economy is doing less badly than expected, and it has always been clear that Greece needs more aid.

The Pound is trading closer to 1.5550 against the US Dollar at the time of this writing, and the pair may again see resistance by the key 1.5600 level. Support may be provided at 1.5410, by the 50% retracement of the rise from the August low to the August high.