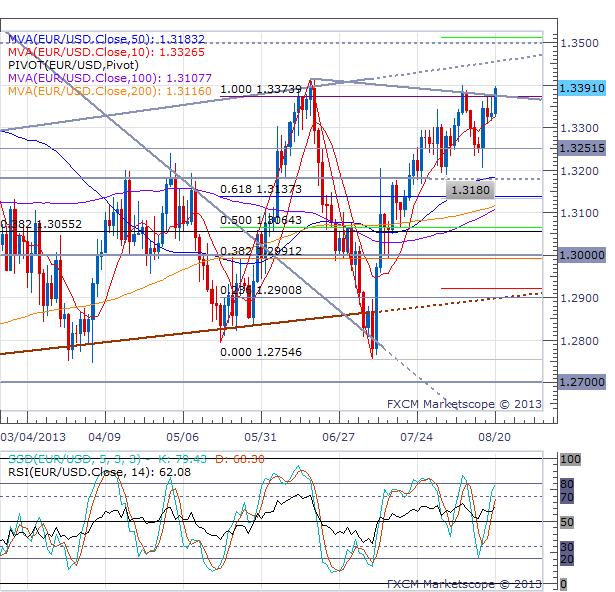 Why The Euro is Negatively Correlated to European Equities

EUROPEAN SESSION UPDATE: An explanation is needed to show why the correlation between the DAX equity index and EUR/USD has fallen from slightly positive to -0.81…

In a session where European equity indexes are trading significantly lower, there was little meaning to the economic releases from Europe, and risk appetite seems to be lower, it is tough to explain why the Euro had a 60 pip rally against the US Dollar.

The incongruence between the direction of European equities and the Euro seems to be a phenomenon gaining momentum over the past few weeks. While the correlation between EUR/USD and the German DAX equity index was 0.16 for the past year, that correlation has dramatically fallen to -.73 for the past month and -.81 for the past week.

So, why are European equities suddenly trading in the opposite direction of the Euro? One possible argument is that the end to the Euro-zone’s technical recession in Q2 may give reason for the ECB to consider a rate hike a lot sooner than the central bank is willing to let on. Similar to the effects of Fed taper talks seen in the US markets, a rise in the target interest rate may hurt European markets that have enjoyed the cheap liquidity of a low interest rate, while sending the Euro higher on less currency supply.

The possible rate rise was spoken of yesterday in the Bundesbank’s monthly report, and was taken seriously despite President Draghi’s recent comments to the contrary. Furthermore, overnight interest rate swaps are currently pricing in a 23 basis point rise in the ECB target rate over the next 12 months.

However, that is just one theoretical explanation of the negative correlation. It may also be an effect of the likely US Fed taper in the upcoming months. The slowdown of Fed sponsored liquidity in US equity and bond markets may have rippling effects through global markets, explaining the decline in European indexes. However, Currency Strategist Ilya Spivak has also identified that the taper’s effect on the US Dollar may already be priced in, while an exit from volatile US bonds into foreign markets may now be weighing on USD trading and sending the Euro higher against the greenback. Thereby explaining why the Fed taper talks are causing EUR/USD to rise as equity indexes are declining.

Also contributing to the EUR/USD rise, ECB’s Asmussen said today he will travel to Greece tomorrow to talk to officials there about adjusting the debt payments. Concern has been expressed recently by German and French officials over the ability of Greece to keep up with its payment schedule, although those officials said they are not suggesting another haircut. Therefore, any extension to Greece’s debt payment schedule may be considered Euro positive.

The Euro was less than one pip away from setting a new 2-month high today against the US Dollar, which currently sits at 1.3400. The pair has seen a 75 pip rally over the 2 hours before the time of the writing of this article. That 1.3400 high may continue to provide resistance, while a broken resistance line around 1.3180 may provide support.