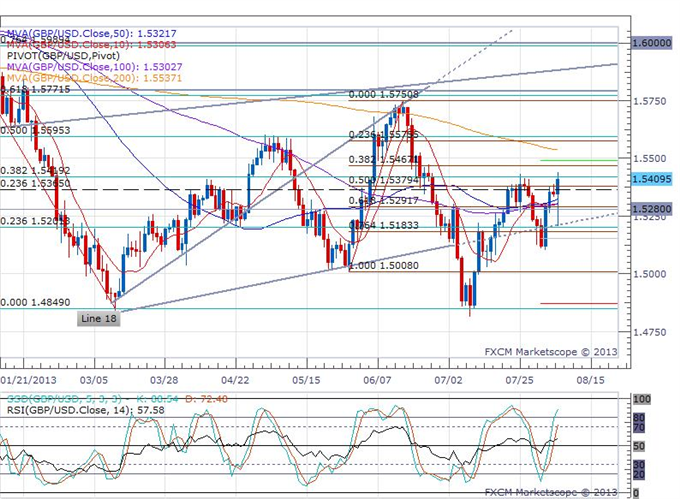 Although Governor Carney took over the reins at the Bank of England following a term at the Bank of Canada, it seems to be a Fed style of monetary policy that the central banker has brought across the Atlantic Ocean.

The Bank of England announced today in its quarterly inflation report that it will only again raise interest rates after the unemployment rate has fallen back to 7%. However, the BoE clarified that the 7% unemployment threshold does not mean that rates will automatically be raised should joblessness fall to that level, rather that is where the BoE will once again consider raising interest rates.

The Pound initially declined about 90 pips against the US Dollar following the announcement of the link of monetary policy to unemployment. However, those gains were soon erased, and Cable rose an additional 100 points, on BoE comments about inflation flexibility.

While BoE members have previously mentioned inflation flexibility, the BoE finally applied limitations to that flexibility in today’s report. The inflation report said that if inflation remains above 2.5% in another 18-24 months, then the unemployment condition to raising interest rates will be “knocked out”. Meaning, if inflation remains above 2.5% in another 2-years, the BoE may raise interest rates no matter what the unemployment. The Bank of England predicts that inflation will remain around 2.9% in the near term, but fall closer to its 2% target over the next two years.

The ILO most recently announced the unemployment rate for the three months ending in May at 7.8%, and three-month unemployment was last seen below 7% in February of 2009. Furthermore, the BoE forecasted that unemployment will remain above 7% until at least the third quarter of 2016. Therefore, the BoE is expecting to leave the interest rate at the current record low for at least three years, assuming inflation falls according to the central bank’s expectations. Regarding the possibly more immediate asset purchase target, Carney said the BoE is ready for more bond purchases if necessary.

Regarding economic recovery, Governor Carney said although there is a recovery taking place, it is the slowest recovery in the UK’s history.

Cable has reached a new monthly high at 1.5442 following the inflation report and Carney press conference. GBP/USD may next see resistance by the key 1.5500 level, and support may be provided by a broken resistance line around 1.5280.