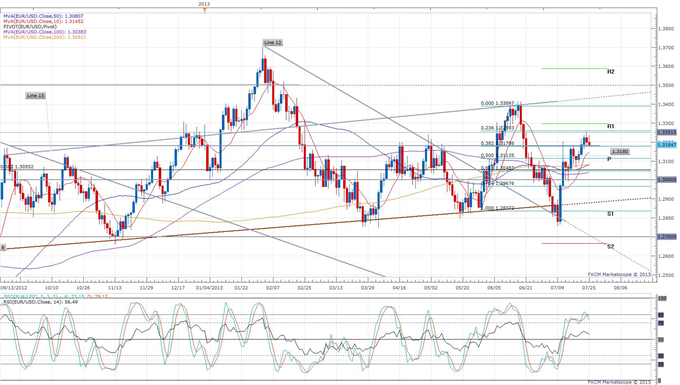 THE TAKEAWAY: 2.5 billion Euros were approved for the next payment to Greece during a conference call between aid officials; Euro slightly lower after a 500 point rally since early July…

EU sources have confirmed that a 2.5 billion Euro aid payment for Greece was approved during a special conference call between EU finance officials today. However, the Euro did not react significantly to the news, as a recent Troika report seemed to imply that Greece would qualify for the next aid tranche.

Beyond the Greek aid news, there was little to talk about during the European session. Equity indexes and futures trading in Europe and North America showed little risk related conviction in today’s market. In economic releases, the German Import Price Index declined 0.8% in June.

The Euro is trading slightly lower against the US Dollar in today’s session, but the pair has yet to show any signs of pulling back from the impressive 500 point rally from a low earlier this month. A five month high at 1.3390 may now provide resistance, and a broken resistance line around 1.3250 may provide support.

In the North American session, attention may be turned to the University of Michigan Confidence for July.