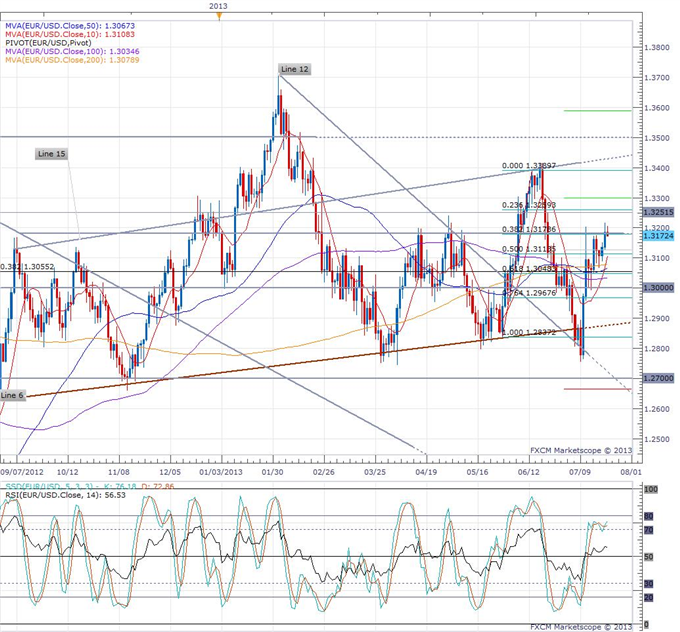 EUROPEAN SESSION UPDATE: ECB’s Draghi only predicts a return to growth by the end of the year; US Dollar sheds earlier weakness…

Statements released by officials in two of the Euro-zone’s bigger economies predicted improvements in GDP performance. France Finance Minister Moscovici said today that the second quarter is likely to have seen French economic growth, while the Bank of Spain predicted that Spanish GDP shrank 0.1% in Q2. In Q1, we saw a 0.2% decline in French GDP and a 0.5% decline in Spanish GDP.

Euro-zone GDP contracted 0.2% in Q1 of this year, and ECB President Draghi predicted the region will return to growth by the end of the year. Spain and France make up about 30% of the Euro-zone’s economy. The Bank of Spain said strong exports drove the moderations of the recession.

Despite the optimistic comments, the Euro is trading slightly lower against the US Dollar in today’s session at the time of this writing. The US Dollar shed earlier weakness halfway through the European trading hours. EUR/USD is currently sitting around 1.3175, and the pair may continue to see resistance by a horizontal line near 1.3180. Support may be provided by the key 1.3000 level.

There were few releases of significance during the European session. Euro-zone consumer confidence will be released at the beginning of the North American session, -18.3 is expected. France business confidence slightly beat expectations at 95, according to today’s release.