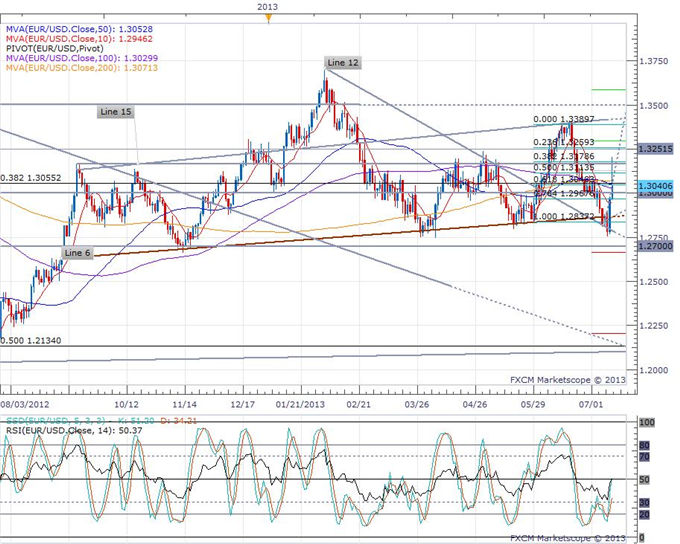 The three central banks in charge of the monetary policies behind the three most heavily traded currencies have all taken a turn over the past 24 hours grabbing headlines and moving Forex markets.

The minutes from the Fed meeting yesterday followed by a Bernanke speech after the close of the US markets led to a selloff in the US Dollar. Then, USD/JPY sold off further overnight as the BoJ released comments implying they are less likely to increase stimulus before the end of the current year, citing inflation targets as on-track.

Furthermore, during the European session, Kuroda supported those on-track sentiments by saying the BoJ has taken enough measures to achieve the 2% inflation target, but he added that the central bank may make more policy adjustments as needed. Although the BoJ cut some price forecasts on recent falls in commodity prices, Kuroda said that the BoJ is likely to achieve the inflation target in the second half of the forecast period, likely meaning the end of FY2014 or the beginning of fiscal year 2015. However, USD/JPY did not react strongly to Kuroda’s comments, as price action was already taken with the initial release.

Additionally, the ECB released its monthly bulletin today. Its Draghi-like dovish tone seemed to be matched by some unsurprising hawkish comments from German ECB member Weidmann. The bulletin said that rates will remain at the current level or lower for an extended period of time, echoing Draghi’s comments. It further defended the new forward guidance, by saying it is fully consistent with the central bank’s mandate.

At the same time the bulleting was released, ECB’s Weidmann made some comments that seemed to contradict both the bulletin statements and himself. Weidmann said that monetary policy has ventured into dangerous territory, but he also said that the economy, inflation, and lending justify the low rates. He further said the ECB will lift rates in time if inflation rises, despite Draghi’s comments that rates will remain low.

Forex markets seemed unsurprised by both the ECB statements and Weidmann, as the Euro continued to trade around the 1.3050 level against the US Dollar. EUR/USD may now see support by the key 1.3000 line, and resistance may continue to be provided around 1.3165.