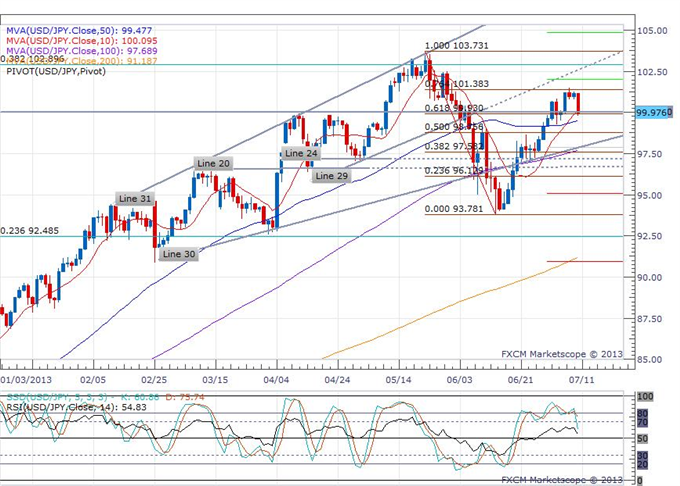 The European session has remained relatively quiet thus far, with few economic releases and no standout comments to drive any of the currencies. However, the US Dollar has declined against the other major currencies during today’s trading, down 1.11% against the Japanese Yen at the time of this writing. The decline in the greenback likely comes in preparation for today’s release of the minutes from the last FOMC meeting and a scheduled Bernanke speech later today, US Dollar traders may be worried about further comments supporting the taper.

In Germany, the annual inflation rate was confirmed at 1.8% in June, slightly higher than the 1.6% inflation seen across the Euro-zone in June. France manufacturing production declined 1.1% in May and slightly more than expected, while Italian industrial production was reported today to have only risen 0.1% in May, also slightly below expectations. However, neither release had a significant effect on Forex trading.

In Japan, the consumer confidence index for June was reported today at 44.3, lower than expectations for 45.6. The Yen has been trading higher against the US Dollar following weak trade data from China. USD/JPY is trading a few points below 100.00 at the time of this writing, and the pair may see resistance by that key figure. Support may be provided by a rising trend line from February, currently at 97.50.