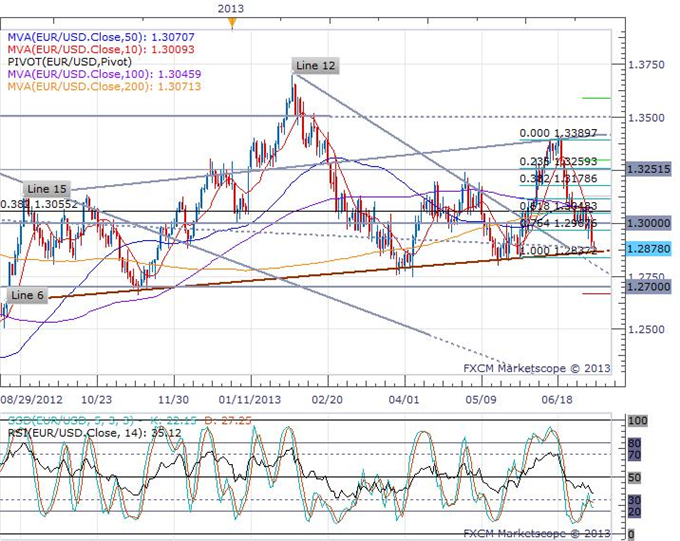 The European session has been a quiet one, but the Euro and the Pound are each trading lower against the US Dollar, which may be a continued reaction to yesterday’s dovish guidance reports from both the BoE and the ECB, or trading in anticipation of today’s NFP release in the US.

The worries over a collapse of the Portuguese government seem to be dying down, as it was announced yesterday that the coalition parties came to an agreement. The 10-year bond yield, which spiked from around 6.5% to 8.0% during the initial story, has declined back below 7.0% over the past two days of trading.

Swiss annual deflation in June was reported today at -0.1%, slightly less than expectations for consumer prices to decline 0.4% from June 2012. The release led to a temporary and muted gain in EUR/CHF.

In other economic releases, the German Factory Orders for May will be released at 10:00 GMT. Also, the Japanese Leading Index reached a six year high in May but had little effect on Yen pricing, as traders may be focused on the BoJ’s 2% inflation goal.

The USD change in Non-Farm Payrolls will be released at 12:30 GMT, and may carry volatility for the US Dollar. Live FXCM account holders and DailyFX subscribers can watch Senior Currency Strategist David Rodriguez’s live coverage of the event here.

The Euro has continued falling further below 1.2900 against the US Dollar in today’s trading. The pair may see support by a rising trend line from September 2012, currently at 1.2867, and resistance may come in at 1.3000.