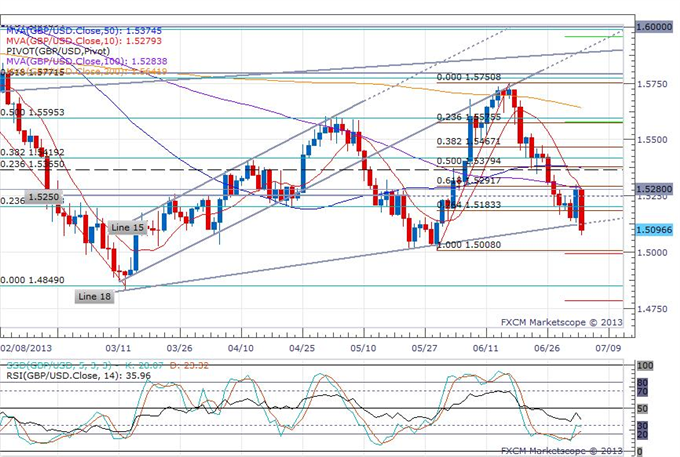 The Bank of England released slightly dovish forward guidance with its July interest rate and asset purchase decision, thereby breaking away from the usual habit of not providing reasoning for the decision until the release of the meeting’s minutes later in the month. The BoE comments noted that higher market interest rates are weighing on its economic outlook, which led to a selloff in the Pound against the US Dollar.

The BoE decided to keep the interest rate and asset purchase target at 0.5% and 375 billion Pounds respectively, as was expected by a majority of Bloomberg surveyed analysts. However, there was speculation that the new governor, Marc Carney, would look to add a forward guidance statement, as a measure to explicitly spell out flexible inflation targets and desired economic performance. Therefore, the appearence of forward guidance that noted worry over interest rates was received as dovish in Forex markets.

Regarding economic performance, the BoE said that although the economic recovery is on its way, it is still weak based on historical standards and slack is expected for some time. These comments may have been seen by some as unexpected following the recent multi-year highs seen in UK manufacturing and services PMI’s.

The central bank also said that inflation is set to rise further above May’s 2.7% rate in the near term, but will eventually fall back to the BoE’s target inflation rate. The minutes from the meeting will be published on July 17.

The presence of the forward guidance as well as the new concerns over market interest rates drove the Pound over 150 points lower against the US Dollar. GBP/USD is trading below 1.5100 at the time of this writing, and may next see support by the key 1.5000 level. Cable may find resistance by a rising trend line from March, currently at 1.5128.