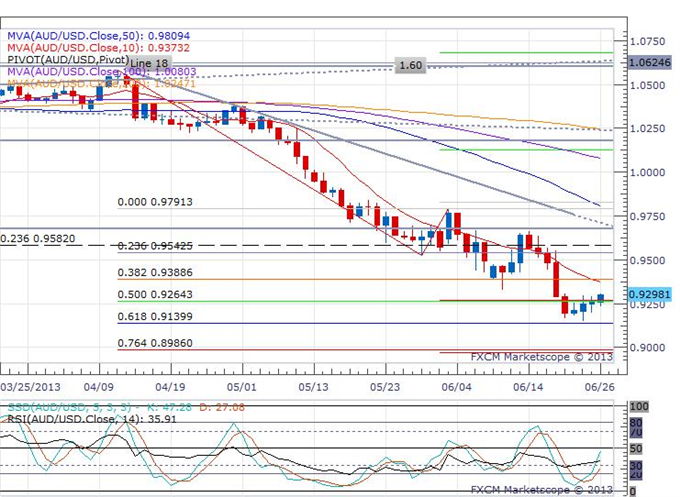 The Aussie is up, the Pound is down, and ECB President Draghi still sounds unsure if the central bank will further loosen monetary policy; that is the picture painted at the halfway point through today’s European session.

One of the biggest stories of the day, although one that does not seem to be affecting Forex trading, is the upcoming Australian ballot for the leadership of the ruling Labor party. Prime Minister Gillard agreed to the ballot, which is set to take place at 09:00 GMT, following opposing Rudd’s plan to force a leadership vote. The winner of the ballot will run as labor’s candidate in the September elections for premier, and polls currently see Gillard decisively loosing those elections on the Labor ticket. It also seems as though Gillard might step down right away if she looses the ballot.

The Australian Dollar does not look like it has reacted significantly to the elections story, and it does not seem like there is a clear direction for the Aussie associated with the election results as there has been in other elections, e.g. the vote for Japan PM Abe. AUD/USD has risen above 0.9300 in today’s trading, but that may have just been a reaction to market wide risk-on trading, as can also be seen in Kiwi trading.

ECB President Draghi spoke in Paris today, where he made a lot of comments that Forex traders have already heard in the past few weeks. Some of Draghi’s comments included his prediction for a Euro-zone recovery at the end of the year , but a commitment to the continuation of accommodative policy.

There were few economic releases today, and the biggest release is likely to be the Bank of England’s financial stability report. In Germany, the GFK consumer confidence survey rose to 6.8 for July, and the IFO said today that it expects the German economy to grow 0.6% in 2013, double the Bundesbank’s most recent growth forecast.