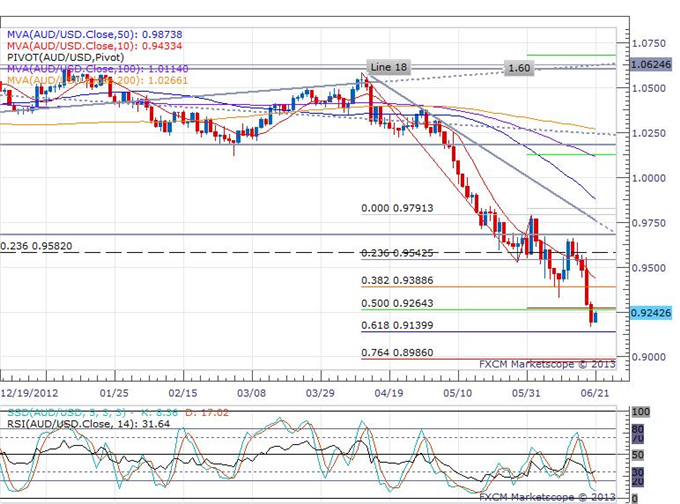 Markets in the European session seem to be suggesting an end or pause to the two days of FOMC generated risk aversion. The carry trade associated Aussie is the biggest winner so far in today’s trading, while the safe-haven Yen has declined 0.48% against the US Dollar. European and Japanese equity indexes are trading higher, and US equity futures are pointing upwards.

There was little news in the European session to account for the rise in risk appetite; rather, we may just be watching the dust settling from the past few days of selloff. There was little significance to the economic releases in the European trading hours, and the Euro and Pound are each trading slightly lower against the US Dollar at the time of this writing.

European Unions finance ministers will be meeting today, and a banking union is a likely topic of discussion. Both EU Commissioner Rehn and France Finance Minister Moscovici said they think a deal on a banking resolution will be reached today. In a meeting of Euro-zone finance ministers yesterday, the leaders agreed to allow ESM loans used in the past to recapitalize failing banks to be retroactively taken off the governments’ sovereign debt amounts, but that decision will only be implemented on a case by case basis.

Finally, despite the central banker’s usual stance to hold off from speaking about the Yen’s level, Bank of Japan Governor Kuroda said today that currency developments helped a pickup in exports. The Nikkei erased earlier losses today and closed 1.66% higher.

The Australian Dollar is trading slightly above 92.00 against the US Dollar at the time of this writing. The pair may see support around 0.9140, by the 61.8% Fibonacci extension, and resistance may come in by the key 0.9500 level.