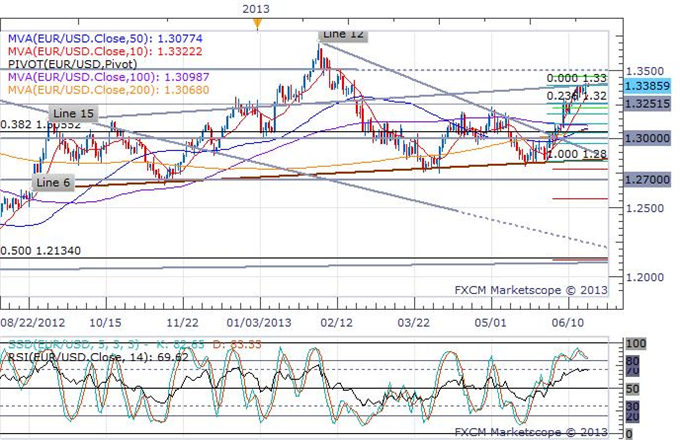 It’s tough to write a lot about a quiet European session, when we are only hours away from arguably the most important monthly economic release for the Forex markets. Trading was fairly quiet in the European session, when the US Dollar fell slightly against the Japanese Yen and the Australian Dollar, ahead of today’s FOMC rate decision and Fed’s Bernanke’s press conference.

The most notable event of the European session was the release of the minutes from the BoE’s June meeting. The minutes again showed a 6-3 vote against raising bond purchases, but a positive inflation outlook may have been responsible for the decline in Pound following the release.

In other economic releases, the Credit Suisse survey of Swiss expectations was unchanged in June at 2.2. Also, Euro-zone construction output rose 2.0% over the month of April. Neither release had significant effect on Forex markets.

Additionally, the Euro-zone denied a request to revise the terms of the Cyprus bailout conditions. The Commerce Minister commented that capital controls in Cyprus are more damaging than a banking levy. Euro traders seemed to be unconcerned with the Cyprus related headlines.

The Euro continues to trade below 1.3400 against the US Dollar at the time of this writing. The pair seems to be finding resistance by a rising trend line from September 2012, EUR/USD may see support by a broken resistance line around 1.3250.