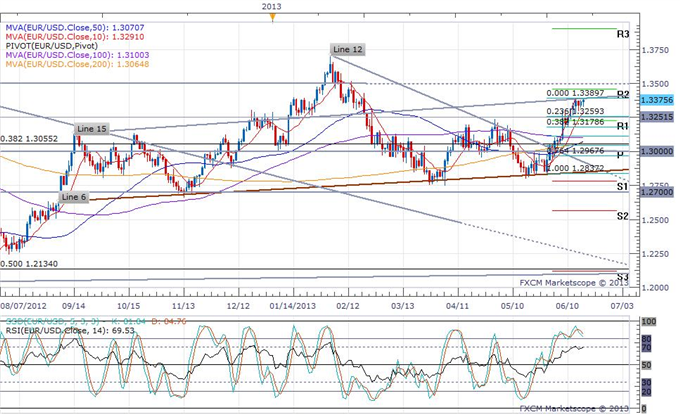 The German Zew Survey of analysts’ and investors’ expectations rose to a three month high of 38.5 in June, beating expectations for 38.1 and up from 36.4 in May. The Zew survey of current sentiment unexpectedly fell back to 8.6 in June, while the Euro-zone economic sentiment survey rose to 30.6.

The higher expectations for an improved German economy contradicted the Bundesbank’s prediction yesterday that the German economy will slow in the summer. In April, the German government cut its growth prediction to 0.4% in 2013, and the economy expanded by 0.1% in the first quarter of this year.

The Euro set a four month high against the US Dollar at 1.3398 following the release, but the pair did not sustain those gains. EUR/USD may continue to see resistance around 1.3400, by an upward trend line from September 2012. The pair may see support by a previous resistance line near 1.3250.

The Euro experienced some losses earlier in the session, following perceived dovish comments by ECB President Draghi at a Bank of Israel event in Jerusalem. Draghi reiterated that the ECB has an open mind on non-standard monetary policy if circumstances warrant, but he warned that such tools may have unintended results. In the past, Draghi has listed negative deposit rates as one of those non-standard tools. The Euro soon erased the decline that followed Draghi’s comments, maybe because of the realization that Draghi did not sound any more dovish than he did at his last press conference.

Recent volatility seen in Japanese equity trading calmed a bit today, as the Nikkei index closed 0.20% lower. Despite the decline in the Nikkei, the safe-haven Yen is down about 0.87% against the USD at the time of this writing.