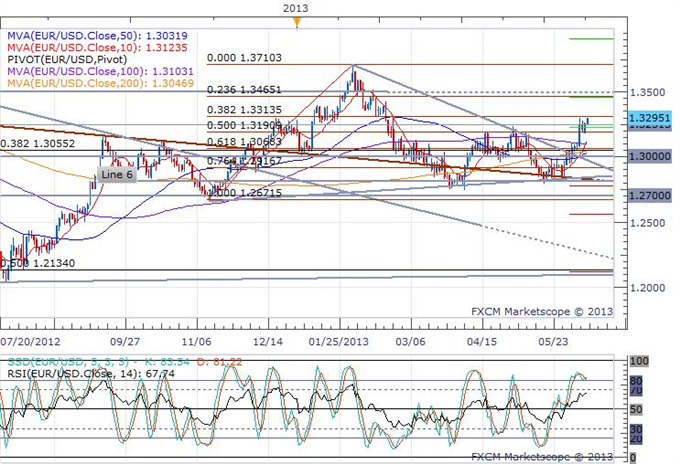 A one thousand point rally in EUR/USD that began at the end of the summer of last year may theoretically be in danger this morning, as the German top court will review the European Central Bank’s Outright Monetary Transactions program. The ECB’s untested OMT commitment to support struggling countries’ bond prices was given credit for much of the rise in Euro from a two-year low seen in the summer of last year.

Despite opposition by ECB member and Bundesbank head Weidmann, the German government supported the ECB’s decision to start the program. German Chancellor Merkel said today that the government will argue in front of the court in favor of the OMT program. The court will also review the ESM permanent bailout fund for the Euro-zone.

Federal Constitutional Court President Vosskuhle said today that the success of the OMT program doesn’t prejudice legal issues, as ends don’t justify the means. However, there is little expectation that the court will block the OMT program, but there are worries that it may limit the amount of bond purchases.

However, there seems to be little worry about the repercussions of the court review, as the Euro is trading 0.25% against the US Dollar in today’s Forex market at the time of this writing. EUR/USD may next see resistance at a 3-month high set recently at 1.3306, and the broken resistance line around 1.3200 may now provide support.

BoJ Governor Kuroda spoke at a press briefing this morning, following the central bank’s decision to keep monetary policy unchanged in its June meeting. Kuroda said that the BoJ is watching long term loan rates and the BoJ members will discuss longer fund operations when necessary. The Yen did not react to Kuroda’s comments, but the Yen is trading significantly higher in today’s session following the initial BoJ announcement.