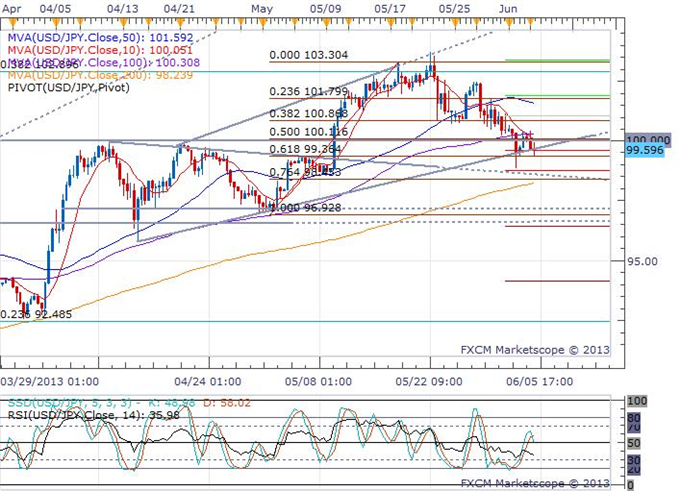 Euro-Zone Economy Contracts for a Sixth Consecutive Month, as Estimated

Euro-zone gross domestic product was confirmed to have decline 0.2% in the first quarter, thereby keeping the Euro-zone in a recession for the sixth consecutive quarter of economic contraction. Euro-zone GDP declined 1.1% from Q1 2012, according to the final estimate by Euro-stat.

Retail sales for April were released alongside the GDP report, and sales declined 0.5% over the month, disappointing expectations for a 0.2% decline and better than the revised 0.2% drop in sales seen in March. Retail sales fell 1.1% from April 2012, according to Eurostat.

However, the Euro did not react to the two releases, and EUR/USD continues to trade above 1.3000. The Pound was the biggest mover out of the three major European currencies in today’s Forex session, as GBP/USD rallied above 1.5350 following the better than expected PMI release.

The Japanese Yen remains the big winner so far in today’s trading, following Japan PM Abe’s latest speech concerning so-called Abenomics. Abe spoke about the third part of his economic plan, to loosen regulations on businesses. However, the markets seemed to be disappointed by the delay in the implementation of the plan, and the Nikkei equities index closed 3.83% lower.

The US Dollar fell below 100.00 against the Yen following the Prime Minister’s speech, as the risk-off reaction to the delayed plan possibly benefited the Yen as a safe haven currency. USD/JPY continues to trade around 99.50 at the time of this writing, and may see resistance by the key 100.00 figure.