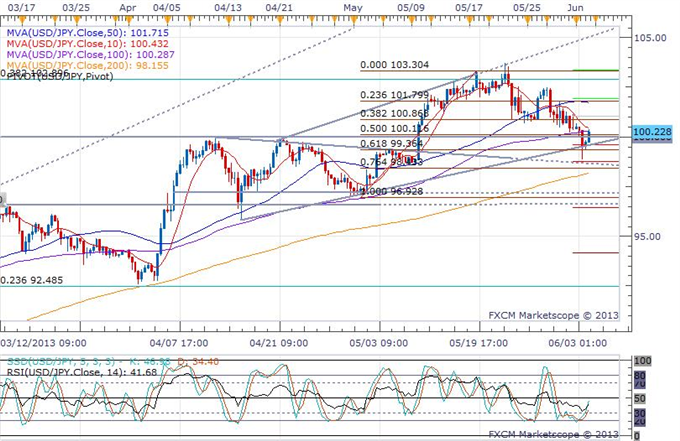 Attention during today’s European session in the Forex markets may have remained focused in Asia and Australasia, as the Yen and Aussie continued to make significant moves while the Pound and Euro stayed relatively quiet.

The Japanese equities index closed 2.05% higher today, which was accompanied by an unwinding of nearly all of the Yen gains seen in yesterday’s session. Japanese Prime Minister Abe said that he sees recovery signs in production, consumption, and GDP, but he said that there are unstable movements in the financial markets. He added that a strong Yen made companies less willing to invest.

As the Nikkei was closing higher, USD/JPY climbed back above 100.00, where it continues to trade at the time of this writing. The key 100 level may provide support here, while a four year high recently set at 103.73 may provide resistance.

Meanwhile, the Australian Dollar continued to lose ground against the US Dollar and fell below .9700. AUD/USD saw some temporary gains following the announcement of an RBA rate hold, but the comments regarding inflation providing scope for further easing may have been partially responsible for the Aussie serving as the biggest loser so far in today’s Forex markets. The Australian GDP for Q1 will be released tomorrow, and a better than expected release may allow the RBA to again choose to not cut its rate target in next month’s meeting.

In the UK, the construction PMI surprisingly showed expanding activity for the first time in seven months, but the Pound failed to hold onto gains first seen following the release.