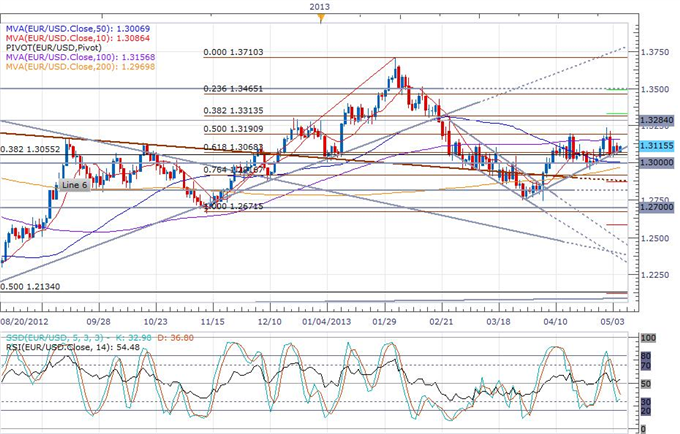 German manufacturing orders increased by 2.2% in March (seasonally adjusted), thereby vastly outperforming expectations for the factory orders to decline by 0.5%, and the March rise in orders was the same as the revised 2.2% rise reported in February. Factory orders fell 0.4% from March 2012, according to the Economy Ministry.

Domestic manufacturing orders rose by 1.8% in March, while export factory orders rose 2.7% over the month. However, consumer goods orders fell by 0.7% in March. The Economy Ministry said that industry is overcoming a weak phase.

The significant rise in manufacturing was surprising when compared to Germany’s manufacturing Purchasing Managers Index for March, which reached a three month low of 49.0 and indicated a decrease in sector activity. The PMI for manufacturing for April was reported last week at 48.1. Following the 0.6% decline in GDP in Q4, the Bundesbank predicted in February that the economy will return to growth in the first quarter on improved industrial production. Germany is the Euro-zone’s biggest economy, and signs of a return to economic growth are Euro positive.

The Euro rose about thirty points and above 1.3100 against the US Dollar following the factory orders release. EUR/USD may next see resistance at 1.3242, by a 2-month high. Support may be provided by the key 1.3000 figure.

Also in the Euro-zone today, the tensions between Germany and France over the austerity versus growth solutions to the Euro debt crisis were brought out into the public. German Finance Minister Schaeuble and his French counterpart Moscovici each spoke on the topic in Berlin today. Schaeuble said there is no monopoly on how to solve the debt crisis and he is worried about Germany’s image in the Euro-zone. Moscovici said Euro policies must tilt towards growth.

While it is unclear exactly how this argument will affect the Euro, accord between Euro-zone countries and crisis resolution is usually Euro positive, while disaccord and worries over a breakup of the Euro-zone are Euro negative.