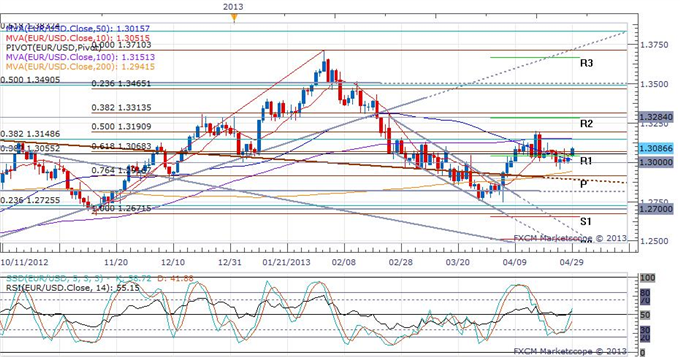 Euro-zone economic sentiment declined for a second month, according to the European Commission’s survey for April.

Economic sentiment was reported at 88.6, disappointing expectations for 89.3 and down from 90.1 in March. Euro-zone consumer confidence was confirmed at -22.3 according to final estimate for April. The Business Climate Indicator declined more than expected to -0.93 in April, while the Services Confidence survey was reported at -11.1, disappointing expectations for -7.1.

The Euro-zone economy has experienced five straight quarters of declining GDP, ending with a 0.6% economic contraction in Q4. Markit said that based on the PMI index, the economy will continue to contract in Q1, although the decline should be less severe than Q4. Signs of return to economic growth are Euro positive.

However, the Euro did not react to the worse than expected economic sentiment survey, and EUR/USD continues to trade slightly below 1.3100 in Forex markets. The pair may next see resistance by a 2-month high around 1.3201, and the key 1.3000 figure may provide support.

Following the agreement to form a coalition agreement between Prime Minister Letta and right-wing leader Berlusconi over the weekend, Italy held a sale of 5 and 10-year bonds in today’s session. The sale brought in 6 billion Euros, as 10-year bonds were sold for a 3.94% yield, the lowest rate since October of 2010.

The German annual inflation rate will be released later in the session, and a softer than expected print may raise expectations for ECB action later this week.