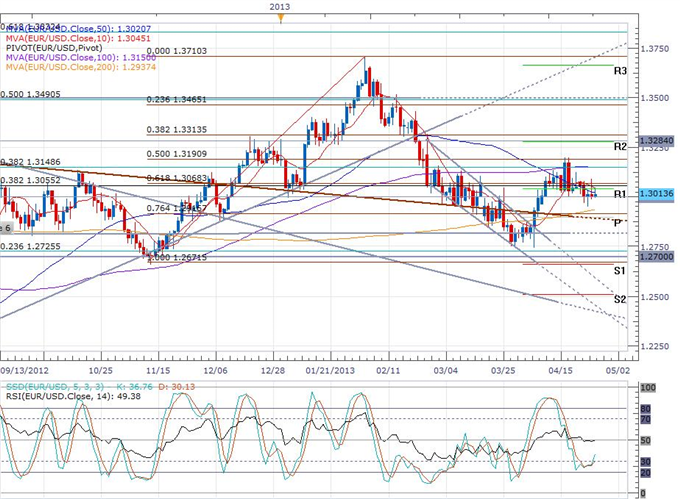 Over today’s European session, we heard guidance from central bankers from around the world about the monetary policy intended to help the banks' local economies. However, besides for an initial Yen reaction to a BoJ policy announcement, Forex market movement has been relatively small over the session.

The Bank of Japan met today to discuss monetary policy, only a few weeks following the momentous meeting from the beginning of the month. The BoJ did not make any changes to monetary policy, but it did raise its outlook for inflation and growth, showing early optimism for its own stimulus plan. USD/JPY fell below 99.00 and down to 98.50 on the lack of increased stimulus.

The BoJ expects core inflation to reach 1.9% by fiscal year 2013, coming close to the central bank’s goal of reaching a 2% inflation rate within two years. Kuroda said the period was extended a bit, as time is need to affect the economy with the monetary stimulus. Kuroda said no BoJ members thought increased easing measures are needed now, but he said some members doubted that core inflation will reach 1.9% by 2015.

In the Euro-zone, ECB member Asmussen said the effect of a rate cut would be limited and too low of a rate cut could lead to distortions. However, Asmussen did say growth in the Euro-zone remains weak. His Greek peer, Provopoulos, sounded more optimistic and said the ECB may never have to use its OMT bond buying program, as there is normalization in the financial markets.

Despite a G-20 enacted taboo over officials discussing currency levels in Japan, SNB President Jordan continued his unabashed discussion of undesired Franc strength. Jordan said the SNB will defend the Franc cap against the Euro with unlimited Forex purchases and that the Franc is still at a strong level. Jordan said he sees no risk of inflation or deflation.

Finally, the political gridlock in Italy seems even closer to being fully resolved following yesterday’s announcement that Letta was named prime minister by President Napolitano. Right wing leader Berlusconi said the PDL party is encouraged after a Letta meeting, and he sees no problem with Letta leading the government. Italy sold 8 billion Euros of 184-day bills today for a record low 0.503% yield.

The Euro fell slightly against the US Dollar over the European session and is now trading a few points above 1.3000 and where it opened. The key 1.3000 figure may continue to provided support, and resistance may be provided at 1.3055, by the 38.2% retracement of the rally from the EUR/USD all time low to its all time high.