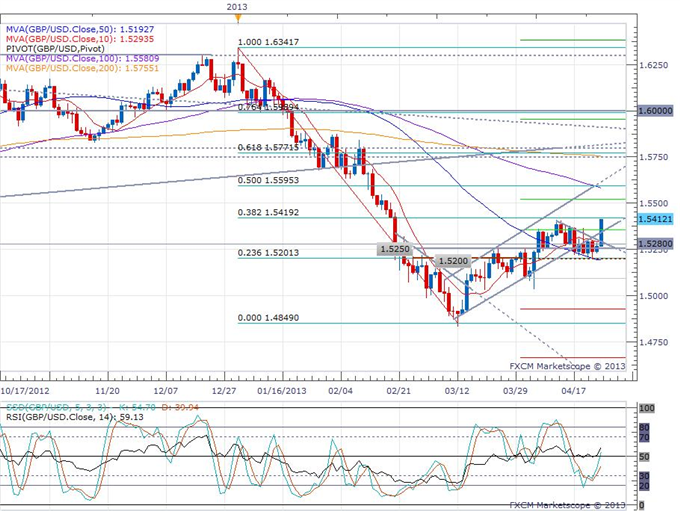 THE TAKEAWAY: UK GDP rises by 0.3% in Q1, more than expected -> BoE’s King sees an economic recovery in the long term -> GBP/USD rises to a two month high

The UK has successfully avoided a triple dip recession, as a beat of the mean analyst expectation for GDP growth sent the Pound to a two-month high against the US Dollar.

The UK economy expanded by 0.3% in the first quarter of 2013, beating expectations for 0.1% growth and reversing from the 0.3% Gross Domestic Product decline in Q4. UK GDP rose by 0.6% from Q1 of 2012 according to an initial estimate by the UK Office for National Statistics.

The economic growth was heavily driven by the services industry, which increased by 0.6% over the quarter and contributed nearly half a percentage point to the GDP rise. Production rose by 0.2% over the quarter, contrasting with construction, which fell by 2.5% over Q1. The information provided for the first GDP estimate is about 44% of total data required for an output based estimate.

The UK economy was one quarter away from entering a triple dip recession, following the economic contraction in Q1. The Bank of England recently predicted that growth will be muted in the first half o 2013, but Governor King said a recovery is in sight for the long term. Signs of further improvements in economic growth are Pound positive.

The Pound rallied about 100 points and above 1.5400 following the better than expected GDP release. The pair may next see resistance at 1.5419, by the 38.2% Fibonacci retracement of the decline from the January high to the March low. Support may be provided by a rising trend line currently sitting near 1.5340.