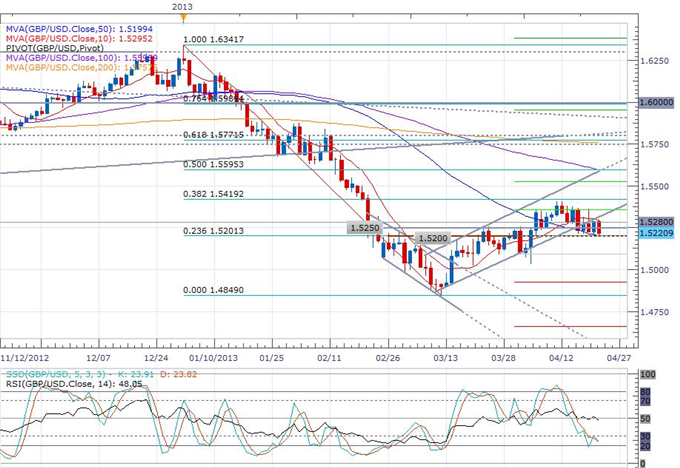 Despite a decline in EUR/USD below 1.30 for the first time in two weeks following a disappointing German PMI for April, other parts of the European markets seem to be showing moderate risk-appetite. The FTSE and CAC equity indexes are both trading significantly higher, and even Germany’s DAX index is trading 0.50% higher at the time of this writing, despite a reversal in PMI’s.

In Italy, confidence may be continuing for a second day following Napolitano’s reelection as president. He will meet with outgoing PM Monti’s party at 5PM local time, and then he’ll meet with Italy’s democrats an hour after that. Expectations are high for Napolitano to successfully form an agreement for a new government and prime minister.

Spain sold bills today for 3.01 billion Euros, beating a maximum target of 3 billion Euros. The successful debt sale came on the back of the Bank of Spain estimating that the Q1 GDP fell 0.5% from the previous quarter. The central bank’s prediction did not seem to affect trading.

The Pound also saw some weakness against the US Dollar following the German PMI results, and GBP/USD briefly fell below 1.5200 for the first time in two weeks. The pair may continue to see support by the key 1.5200 figure, and resistance may resume at 1.5250.