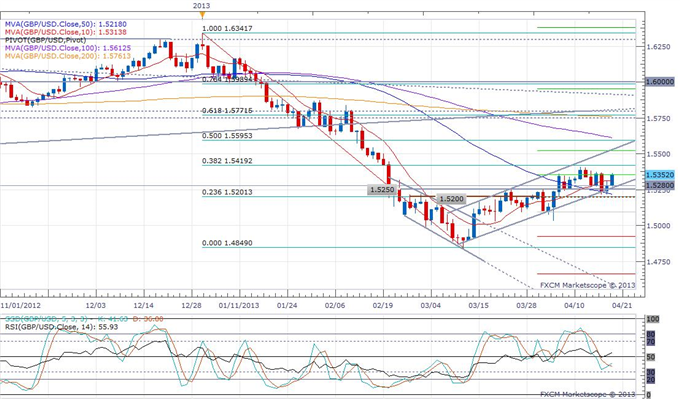 Risk-On Sends Pound, Kiwi Higher on the Back of the Yen

Over today’s European session, the New Zealand Dollar and the Pound continued to show the largest gains among major currencies, while the Yen continued its decline against the US Dollar. The currency movements seemed to reflect a risk-on environment, as European equity indexes were trading higher.

The decline in Yen followed Japanese Finance Minister Aso’s comments that that BoJ’s aggressive easing policy went unopposed at yesterday’s meeting of the Group of 20 in Washington. Aso’s comments seemed to quell worries that the G20 may interfere in the monetary policy, which is expected to also drive down the price of Yen.

There were no significant releases or comments from the United Kingdom to explain today’s rise in Pound trading. GBP/USD is trading around 1.5350 at the time of this writing. A near-month high at 1.5411 may provide resistance, while a broken resistance line around 1.5250 may continue to provide support.

In Europe, the Italian Parliament will vote again today to try to approve a potential presidential candidate. That president may appoint a prime minister over Italy, maybe a technocrat like outgoing Prime Minister Monti. Monti put a number of economic reforms in place, and it possibly would be considered Euro negative if those reforms were repealed by Monti’s successor.

ECB’s Liikanen said today that the ECB is looking at all options and central banks can buy corporate bonds. Despite these possibly dovish comments, the Euro still ticked upwards towards 1.3100 against the US Dollar.

Later today, the ECB will announce the 3-year LTRO repayment amount for next week; 10.8 billion Euros were repaid last week by Euro-zone banks. Also, the Finnish Parliament will also vote today on the Cyprus bailout package.