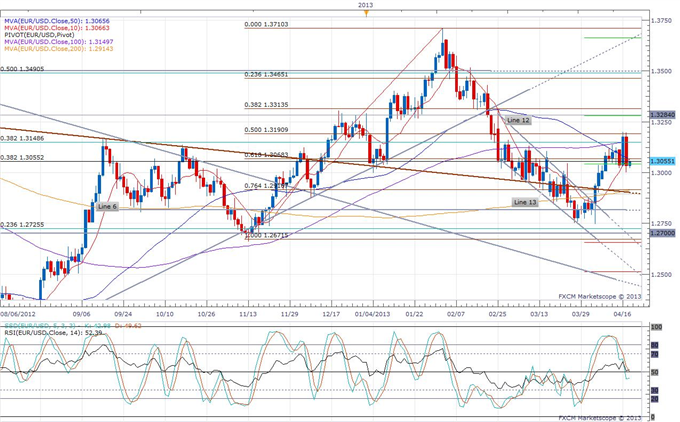 If you don’t think manic-depressive is a good description of the markets over the past three days, then we could at least use the term to describe the feelings of any trader who has remained invested in a risk-correlated asset this week.

Expectations for today’s markets seem to be slightly risk positive as the safe have US Dollar and Japanese Yen are underperforming their risk-correlated peers, and European equities are trading higher in today’s session.

The most positive story from today’s European session comes from Spain, where 10-year bonds were sold for the lowest yields since September 2010. 4.71 billion Euros were raised in the bond sale, beating a maximum target for 4.5 billion Euros. The 10-year bond sold for a 4.612% yield, down from 4.898% in March. Following the bond sale, the Euro erased a twenty five point decline and returned to 1.3050 against the US Dollar.

In Germany, Finance Minister Schaeuble spoke to the Bundestag parliament today ahead of a vote to approve the Cyprus bailout package. As these lines were being written, it was reported that the German lower house voted in favor of the Cyprus baiolout.Schaeuble said it is undisputed that the bailout amount will be limited to 10 billion Euros, and warned that Cyprus insolvency would pose a huge risk to others. Schaeuble further said that Cyprus shows the need for functioning banking oversight, and said the two biggest banks in each country should be overseen.

There was little Forex significance to any of the Euro-zone economic releases today. However, a UK retail sales decline in March disappointed expectations and sent the Pound to a 13-day low. Pound is the only risk-correlated major currency to be losing to the US Dollar in today’s Forex trading.

The Euro is currently trading around 1.3050 against the US Dollar, and the key 1.3000 level may continue to provide support. EUR/USD may see resistance at 1.3055, by the 38.2% retracement of the rally from the pair’s all time low to its all time high.