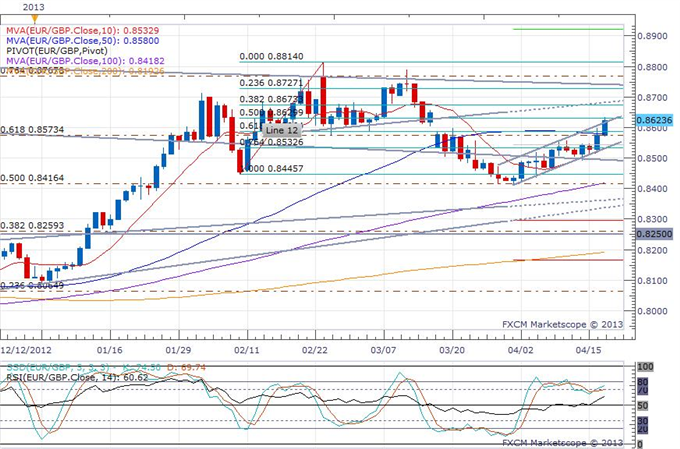 The Pound’s weak performance in today’s Forex markets has led to Euro reaching a new monthly high in the EUR/GBP cross.

There were few driving comments or economic releases from the Euro-zone during today’s session, leading the Euro to stay in a 40-point range against the US Dollar. However, Pound weakness was largely caused by a disappointing UK employment release for the three month period ending in February.

ECB member Praet spoke today and said not to expect too much from the ECB on crisis resolution. Cyprus Finance Minister Georgiades said there is no way his country will leave the Euro, but he added that capital controls will remain for longer. Neither comment seemed to have significant effect on Euro trading.

In releases from the UK, the BoE was reported to have voted 6-3 against adding to its asset purchase target. While the most recent employment releases for March were better than expected, the 7.9% employment rate for the December to Febraury period placed pressure on the Pound.

In Japan, PM Abe again tested a G20 warning against officials talking about local currency levels, as Abe said a strong Yen is being corrected. Japan consumer confidence for March was reported at a five year high, but still disappointed expectations.

EUR/GBP is trading around 0.8620 at the time of this writing. Resistance may be provided at 0.8630, by the 50% retracement of the rally from the February low to the February high.