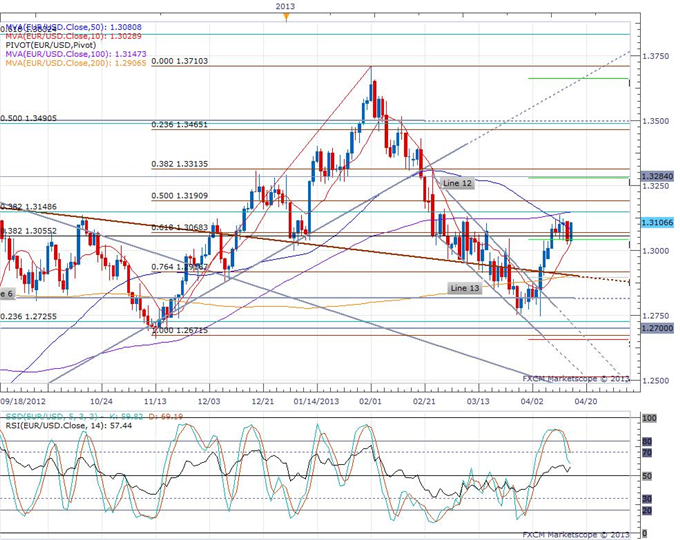 Yesterday’s risk-off splash on the markets, which was set off by a disappointing Chinese GDP print, seemed to settle a bit today. While European equities opened lower, US equity futures are trading higher ahead of the open in North America. A rebound was also seen in Gold, which is climbing closer to 1,400 against the US Dollar, after setting a two-year low yesterday at 1,321.59.

At the time of this writing, EUR/USD is trading back above 1.3100 after declining below the level yesterday. However, there were no specific releases or comments seemingly responsible for the rebound.

In positive news, a Spanish sale of 12-month and 6-month bills brought in 5.07 billion Euros, slightly higher than a maximum target of 5.0 billion Euros. The 12-month bill sold for an average yield of 1.235% versus 1.363% in the March sale. The Spain 10-year bond yield is still trading 0.4 bps higher in today’s secondary markets, and the Euro did not react to the bond sale announcement.

Federal Reserve Bank President Plosser spoke during the European session and said that he favors selling securities in an eventual Fed stimulus exit, but he said he is uncomfortable saying the Fed won’t engage in asset sales.

In economic releases, the UK annual inflation rate was reported at an 11-month high of 2.8%, as was expected. Meanwhile, Euro-zone inflation was reported to have fallen further below the ECB’s target rate. The German ZEW survey for economic expectations declined for the first time in five months in April. None of the releases had a lasting effect on Forex trading.

Euro traders may remain focused today on President Draghi’s speech later. EUR/USD may next see resistance by a 6-week high set recently at 1.3138.