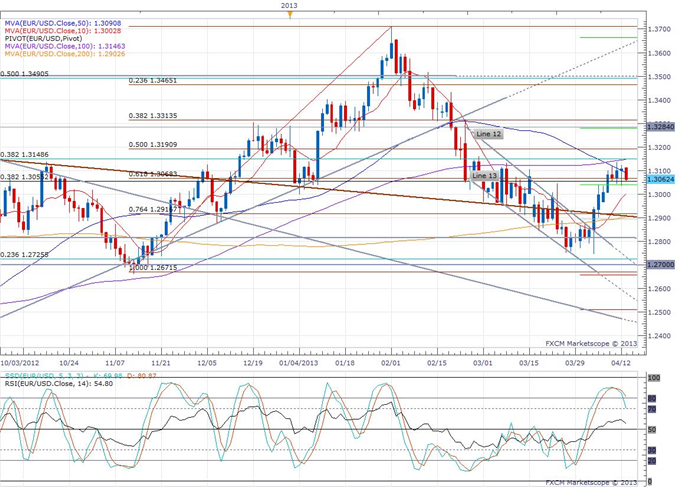 The brunt of the effect of Chinese Q1 economic expansion disappointing expectations could still be felt in the European session, as the currencies from nearby trading partners Australia and New Zealand took most of the damage, and the Euro and Pound also fell against the safe haven US Dollar and Yen. EUR/USD fell below 1.3100 following the Chinese GDP data to 1.3060, and there was not enough significant positive data to help the Euro erase those losses.

On a positive note, the Troika finished its review with Greece, and the group of lenders said the country will see a gradual return to economic growth in 2014. Greek Finance Minister Stournaras said he expects the next tranche of aid to be released soon.

In other good news, the Euro-zone trade balance rebounded from the first deficit in a year and rose by 10.4 billion Euros in February. The trade balance beat expectations for 5 billion Euros. Neither of the two main Euro-zone stories had lasting effects on Euro trading, and EUR/USD may find support at 1.3055, by the 38.2% retracement of the of the rise from the all time low to the all time high.

In Japan, the BoJ upgraded its economic assessment of all 9 of the Japanese regions based on the global economy and domestic demand resilience. BoJ governor Kuroda spoke this morning, and said the Japanese economy has shown signs of picking up. Japan industrial production was reported to have risen for the third straight month in February.