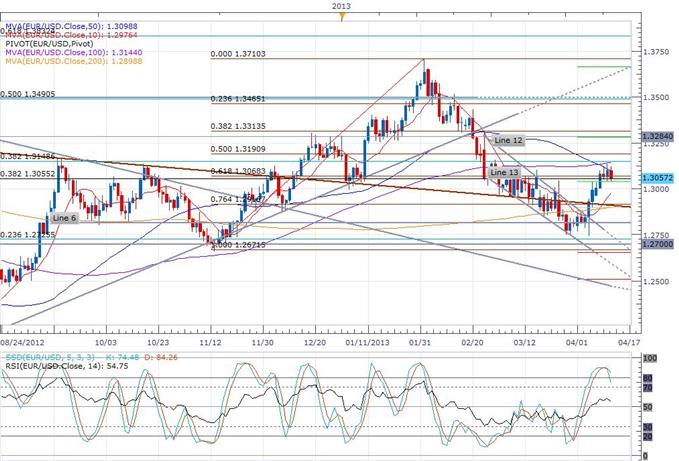 Euro Falls Below 1.31 as Uncertainties Rise Over Cyprus Aid Amount

The European Forex trading session had a lot of head scratching, as the Euro fell from around 1.3120 against the US Dollar at the beginning of the session to 1.3050, with nary a solid catalyst in sight. However, the quandry over the decline in Euro, which was partially matched by a decline in Pound and European equities, may have been answered by mid-session reports that Cyprus would ask for an increase to its 10-billion Euro aid package.

The reports of the Cyprus request were quickly denied by officials around the Euro-zone. Euro-zone finance ministers will start a two day meeting in Dublin today; Cyprus was supposed to be one of the main items on the meeting’s agenda, along with making progress with the banking union plans. The German Finance Ministry said additional aid for Cyprus is not in discussion, and reiterated a figure that Cyprus needs a total of 23 billion Euros. A report also circulated that a Cyprus Finance Minister official denied that the president will be asking for additional aid.

It is unclear if it was definitely early rumors of the Cyprus aid request that was responsible for the Euro decline, but we did see an earlier comment from Euro-group head Dijsselbloem that the Cyprus bailout amount will remain 10-billion Euros. Dijsselbloem also said he hopes to reach an agreement on the Cyprus MOU in the meeting starting today.

In Japan, reports came out that the BoJ may raise its inflation outlook for fiscal year 2014 to 1.5% from 0.9%. Prime Minister Abe broke the government imposed taboo about speaking about Yen weakness, and said today that the foreign currency trend is an overall plus for the economy. USD/JPY fell closer to 99.00 over the session, possibly a corresponding risk-aversion play to the Euro decline mentioned earlier.

In economic releases, the ECB announced today that European banks will repay 10.8 billion Euros of the two 3-year LTRO loans during the upcoming week. This payment is up from the 8.1 billion Euro payment in the passing week. Euro-zone industrial production rose 0.4% in February, slightly better than the 0.2% increase expected. Neither release had an effect on Euro trading.

EUR/USD is currently trading slightly above 1.3050, and support might be provided by the key 1.3000 figure. Resistance might next be seen at 1.3191, by the 50% retracement of the rally from November’s low to the February high.