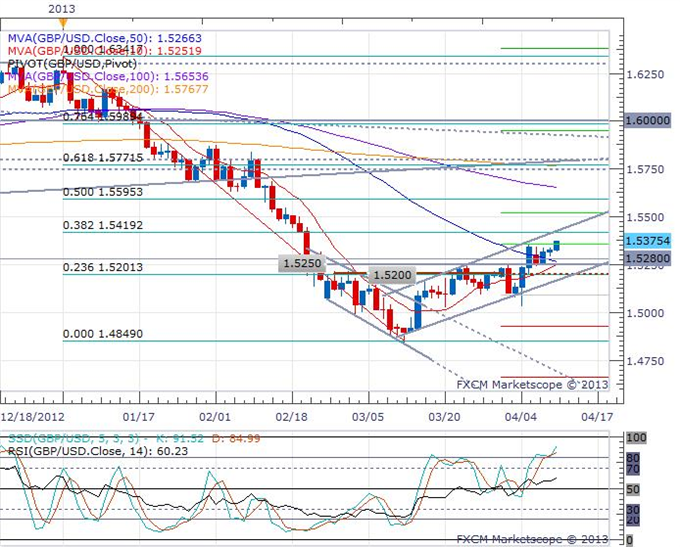 Pound Finds Strength on the Back of Record Equity Highs

Watching American equities over the past few weeks has made me want to put on a party hat and blow horns at the close of the markets everyday. This risk-on energy seems to have only strengthened since yesterday, when the S&P reached record highs.

The risk appetite continued in to today’s European session, as risk correlated equities like the Aussie, Kiwi, and Pound all reached significant highs against the US Dollar. European equity indexes are also trading higher at the time of this writing.

Possibly benefiting from today’s optimism, Italy sold 2016, 2017, and 2028 bonds today for lower yields, despite the political uncertainty following the recent Italian elections. The sale of 2016 government bonds brought in a 2.29% yield, down from the 2.48% yield in March.

Also today, the ECB said in its monthly report that it expects a gradual recovery in the second half of the year, but risk to the outlook is to the downside. The comments reflected Draghi’s comments following the central bank meeting this month and therefore did not have a significant effect on Forex markets.

In other economic release, German annual inflation was confirmed at a two year low of 1.4% in March. The release was unchanged from a previous estimate and therefore had little effect on Euro trading.

The Pound seems to have been benefitting from the risk trends more than the Euro during the European session. Cable set a new seven week high at 1.5378 today, and resistance might next be seen at 1.5419, by the 38.2% retracement of the decline from the January high to the March low. Support might now be provided by the broken resistance line around 1.5250.