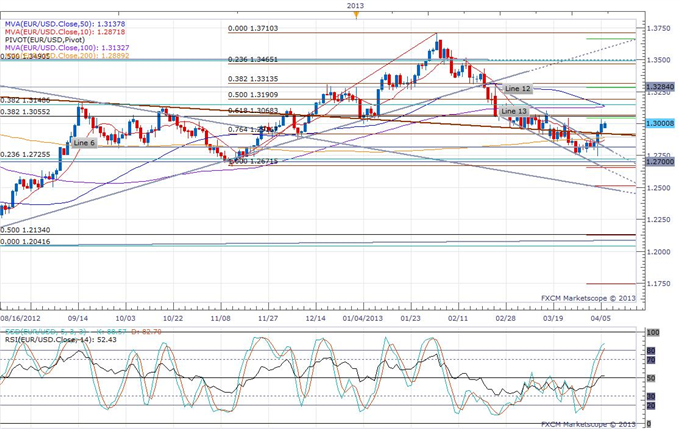 Euro Floats Back Above 1.30 in a Quiet Session

Since the release of the disappointing US Non-Farm Payrolls on Friday, the Forex markets seem to be waiting for the next event worth trading.

One of the few significant releases during the European session, the Euro-zone Sentix Investor Confidence Survey for April fell to a 5-month low. The -17.3 index level was worse than the expected -12.8 Sentix index result. The lower Sentix result matches the declining PMI results reported recently, which have been fueled by recovery doubts and political instability in Italy.

In Portugal, 10-year bond yields were temporarily trading 25.8 basis points higher today to 6.5%, following the court’s ruling to disallow tax hikes, which forced the government to look for spending cuts to continue austerity measures. However, most of the yield increase was soon erased, and the benchmark bond is now trading closer to 6.25%.

The Forex reaction to the Portugal story has been minimum, as the country only makes up 1.83% of the Euro-zone economy. However, similar things were said about the meaning of the Cyprus bailout before the deposit holders were forced to share losses in the bank closure. I am neither suggesting that Portugal will or will not have a significant effect on Forex traders, I am just reiterating that it’s always worthwhile for Euro traders to follow the economic developments in any Euro-zone country, no matter how small.

The Euro is trading slightly above 1.3000 against the US Dollar at the time of this writing, which has served as a resistance line over the past few weeks, and may now serve as support. Resistance might next be seen at 1.3055, by the 38.2% retracement of the decline from Euro’s all time high to its all time low.