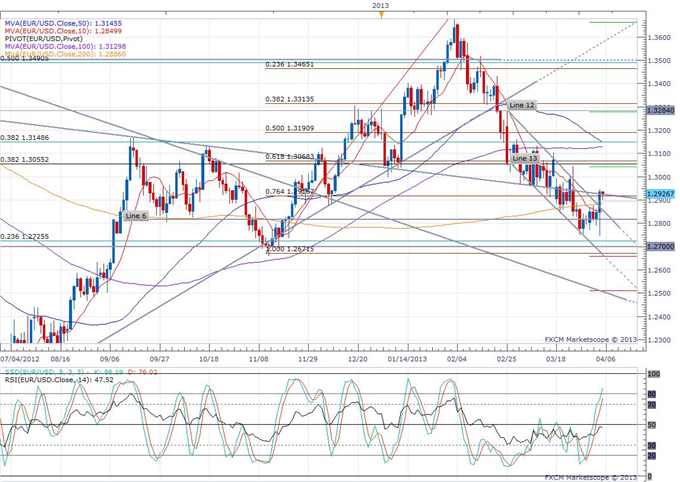 Food, drinks and tobacco sales fell by 0.1% in February in the Euro-zone, non-food sector sales decreased by 1.1%. Following yesterday’s four year low reported in France’s composite PMI, retail sales were reported to have fallen by 2.2% in France. Germany’s retail sales rose 0.4% in February.

The Euro-zone economy has experienced five straight quarters of economic contraction ending with Q4 2012, and Markit reported in yesterday’s PMI release that it predicts the recession will continue into the recently ended first quarter. Signs of further economic decline are Euro negative.

However, today’s retail sales release did not significantly affect Euro trading in Forex markets. EUR/USD rose above a year-long trend line in yesterday’s rally, and may now see support by the line, currently at 1.2925. Resistance may be provided at the key 1.3000 line.

The Euro received a boost to 1.2930 on a better than expected German factory orders release. Orders rose 2.3% in February (seasonally adjusted), beating expectations for 1.1% and higher than the revised 1.6% drop in sales in January.

The ECB announced today that European banks will pay back next week about 8 billion Euros of the two 3-year LTRO loans. That amount is slightly higher than the 7 billion Euros paid back this past week, but had no significant effect on Euro trading.

US Non-farm payroll changes will be announced at 12:30 GMT, and the result may not only affect US Dollar pairs, but general risk appetite in all markets.