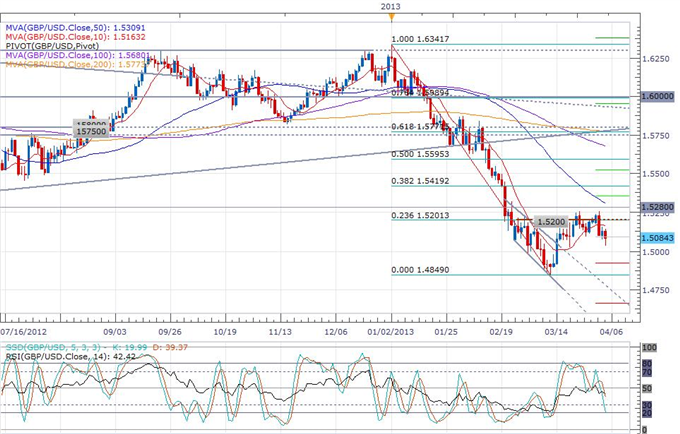 The Bank of England kept its asset purchase target unchanged for the ninth straight month in its April meeting, as the UK PMI’s signaled the economy may return to growth in Q1 and avoid a triple dip recession. Majority of Bloomberg surveyed analysts expected the BoE to keep its quantitative easing program at 375 billion Pounds, which was why the Pound showed no major reaction to the BoE decision. The Monetary Policy Committee decided to keep the interest rate at 0.50%, as was expected.

In March, calls to raise stimulus were outvoted by 6-3. BoE Governor King was one of the losing votes calling for a 25 billion Pound raise to the asset purchase target. There were worries in March that further stimulus could lead to an unwanted drop in Pound, which could weaken local demand on higher import prices. The UK’s 2.8% annual inflation rate, which is well above the 2.0% BoE target, may also be discouraging further quantitative easing.

The Pound showed a delayed reaction to the BoE announcement to not raise stimulus, and rose about thirty points to just short of 1.5100 against the US Dollar. GBP/USD may next see support by the key 1.5000 line, and resistance may continue to be provided at 1.5200.

Comments from Japanese officials about the BoJ decision continued to poor in during the European session, although USD/JPY maintained a 95.50 level, as the initial damage to Yen was already done. BoJ Kuroda sounded a lot like his European counterpart at a press conference, when he said the central bank will take all necessary measures for now to meet the 2% inflation target. The BoJ governor said the 2% inflation target is attainable within two years, disagreeing with some outside dissenters to his goal. Finance Minister Aso said the government will announce a fiscal reform plan by mid year.

Also during the European session, France sold 10-year bonds at a record low yield of 1.94%. The rise in French bond prices is likely a result of increased instability in the Euro-zone following the Cyprus bailout crisis and the Italian political stalemate. However, French PMI’s showed that composite output fell to a four year low in March, and French debt to GDP was at a similar level to Spain at the end of 2012. Therefore, it is tough to explain why French bonds continue to serve as a destination for risk-averse liquidity. I would love to hear any suggestions, feel free to write me at the email below.

Finally, on an optimistic note, Greek PM Samaras said today he aims for 2013 to be the final year for the Greek recession.

At 11:45 GMT, the ECB will announce the interest rate for April, followed by a press conference with President Draghi.