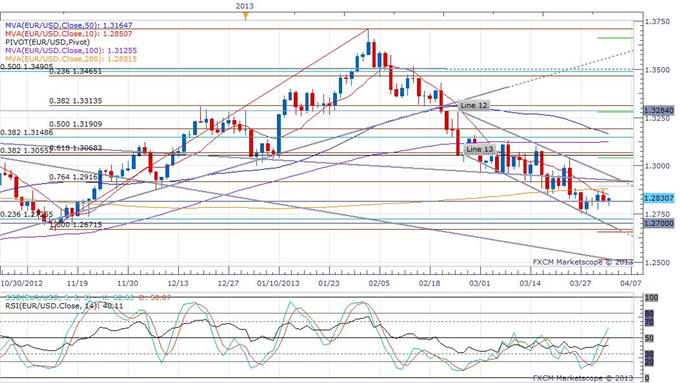 The Euro received a boost at the end of an otherwise quiet European session, on the announcement that the IMF will contribute 1 billion Euros to the Cyprus bailout agreement. It is unclear if the pledge is an addition to the 10 billion Euro aid already agreed upon, or if the IMF will help contribute to that original amount. IMF Managing Director Lagarde said she will seek board approval for the aid in early May.

The Euro rose to 1.2835 against the US Dollar following the news, as the Euro had battled to stay above the 1.2800 line earlier in the session. The 1.2820 support line may continue to provide support from here, and the 200 day moving average may provide resistance at 1.2882.

Before the announcement, the Euro-zone annual inflation estimate was reported at a new 2.5 year low of 1.7%, following 1.8% inflation in February. The estimated inflation was slightly better than an expected 1.6% inflation level, and therefore did not have significant impact on Euro trading.

The ECB predicted that the inflation rate will remain below its 2% target rate in the upcoming months, which allows the central bank to keep accommodative policy. Just yesterday, Germany also reported a new 2-year low annual inflation.

Besides for that, it’s been a very quiet European session. The only other significant economic release was the rebound in UK PMI for construction in March. The slightly worse than expected release only had a temporary effect on Pound trading.