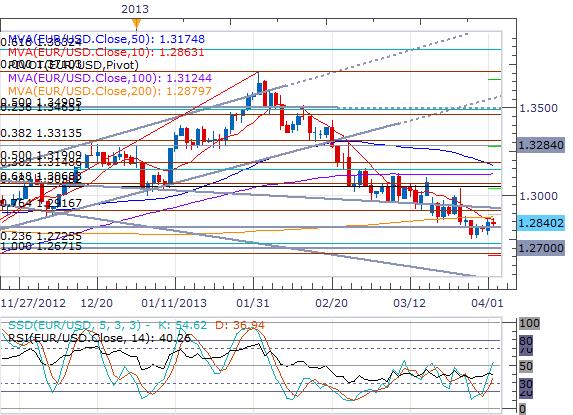 Pound and Euro Decline Despite Rally in Equities, PMIs Add to Confusion

It’s a confusing session when Forex markets show a clear aversion to the two biggest European currencies over their local trading hours, but equity indexes continue to trade higher. The Pound dropped 70 points against the US Dollar over the European session, and EUR/USD also fell 40 points over the session thus far. Meanwhile, the FTSE, CAC, and DAX indexes are all showing 1% rallies.

UK and Euro-zone PMI’s for manufacturing were each released during today’s session, but neither seemed to have an immediate effect on Forex trading. The Euro-zone PMI was revised slightly higher for the final Markit release for March, but the single currency soon continued its decline towards 1.2800. The UK PMI disappointed expectations at 48.3, and Cable only resumed its fall below 1.5200 about fifteen minutes after the release.

Besides for economic releases, Euro investors were also focused on the reopening of the Cyprus stock market, which has been closed since March 15. The Bank of Cyprus and Cyprus National Bank’s stocks, which represent 59% of the Cyprus equity index, will not be traded until April 15. Meanwhile, the third biggest bank’s stock declined 20% following the delayed open. On the whole, the Cyprus equity index fell about 0.5% on the open. Also in Cyprus, capital controls were eased to 25,000 Euros for daily transactions, up from a previous daily limit of 5,000 Euros.

In other economic releases, the Euro-zone unemployment rose to a record high 12.0%. However, the release was as expected and did not significantly affect Forex markets. Spanish net unemployment unexpectedly dropped in March by 5,000, and that release was followed by a temporary rise above 1.2850 in EUR/USD.

At 12:00 GMT, German annual inflation for March will be announced, 1.3% is expected.