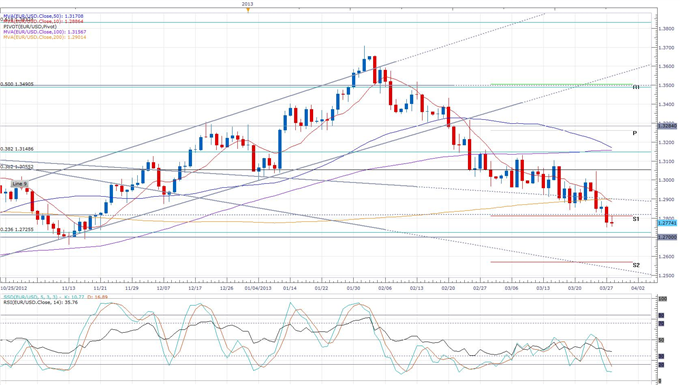 At the start of the European session, we knew to expect further uncertainty from Italy and Cyprus, but who expected to add Germany to the list of countries causing Euro losses this morning?

Following a brief drift back above the 1.2800 level earlier in the session, EUR/USD has dropped back to 1.2760 on a combination of uncertainty and disappointing releases. The pair has yet to retest the four month low set yesterday at 1.2750, which may now provide support.

In Cyprus, lines have just begun to form outside of the banks as they open for the first time in 13 days. Based on some random man on the street interviews by Bloomberg TV, it seems like many of the depositors are there for pent up banking needs, and are not looking to withdraw the limited 300 Euros a day. The Euro saw an earlier decline below 1.2800, as it was announced that the Cyprus stock exchange will remain closed an additional day.

The deadline for Italy’s center-left head Bersani to form a coalition has arrived today and chances of seeing a government come together seem grim. However, the possible alternative of an appointed technocrat doesn’t seem to be displeasing Euro traders. Single currency buyers are probably looking for the new prime minister to maintain the economic reforms put in place by the previous technocratic government head, outgoing PM Monti, and the chances may be good of a second technocrat keeping those reforms.

In economic releases, German unemployment unexpectedly increased by 13 thousand in March, possibly contributing to the decline in Euro. German retail sales grew by 0.4% in February.