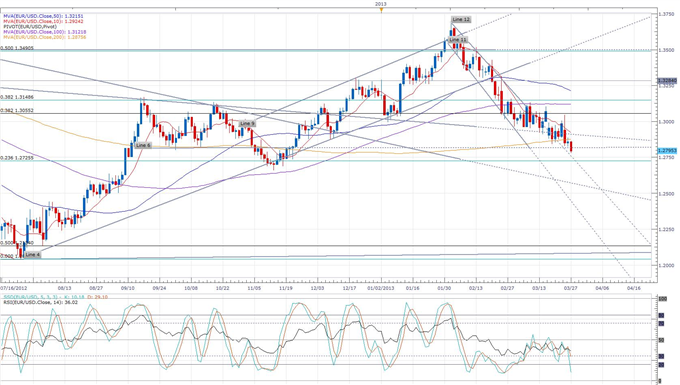 Euro Declines Below 1.28 as the Italian Political Stalemate Worsens

The continuation of the Italian political stalemate caused a rise in 5-year bond yields during a government sale today, and may also have been responsible for the Euro’s dip below 1.2800 against the US Dollar for the first time in four months. Along with the decline in Euro, a clear risk aversion theme can be seen in widening bond spreads, a decline in AUD/USD, and a drop in European equities.

A discussion today between Italian center-left coalition leader Bersani and anti-establishment Grillo, which was publicized via a web video feed, led to no new agreements as Grillo rejected Bersani’s proposals. Meanwhile, Bersani shot down rumors from earlier in the day that he was negotiating with center-right Berlusconi. It is unclear what will happen if Bersani fails to assemble a coalition before the end of his mandate, but it could lead to another technocrat being appointed as prime minister.

Additionally, a sale of 5 and 10-year Italian government bonds brought in 6.91 billion Euros, slightly disappointing a maximum target for 7 billion Euros. 2018 bond yields rose to 3.65% in today’s sale, versus 3.59% during a sale on February 27; the 10-year bond yield actually dropped to 4.66% from 4.83% during that same February sale.

Finally, a rumor of a downgrade to Italian sovereign bonds was the last piece of news that contributed to the 15.0 bps rise in the Italian 10-year bond yield in secondary markets. The German benchmark bond yield dropped 5.7 bps to 1.29%, and the Greece benchmark yield is trading 62.3 bps higher to 12.42%.

Fallout from the Cyprus bailout deal continues in today’s European session, as a Cyprus Central Bank spokeswoman said the banks will open tomorrow and a draft of proposed capital controls is ready. An official Euro-zone document said the Cyprus bailout was not the template for future rescues. This comes as a slightly improved tone, following the Euro-group president’s comments over the past few days that depositors and bond holders may experience losses in future aid deals in the Euro-zone.

The British Pound also fell today on news of disappointing current account in the fourth quarter combined with an announcement from the BoE that there is a 25 billion Pound shortfall among UK lenders.

In the Euro-zone, economic confidence for March was reported at 90.0, disappointing expectations for 90.5. The French GDP for Q4 was confirmed 0.3% lower than the previous quarter. Neither release had significant effect on Euro trading, as concerns over Italy and Cyprus preoccupied traders.