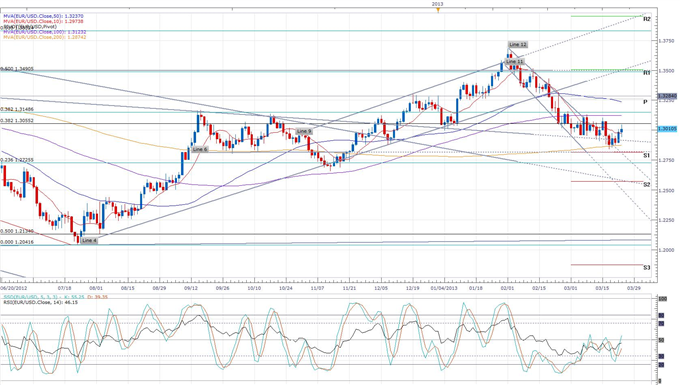 Euro Unwinds Most of the Cyprus Deal Gains, Aussie Continues to Find Wind

Cyprus has managed to secure the Euro-zone’s 10-billion Euro bailout without hurting depositors with less than 100,000 Euros in their accounts, a deal that has sent risk appetite back into the markets. In an update to the deal, there were reports earlier that the Chair of the Cyprus Finance Committee said he believes the losses to large depositors will be 30%.

Although the deal doesn’t need approval from the Cyprus parliament, because of its bank restructuring basis, the deal does need the approval of its lenders in the Euro-zone and Germany. The Bundestag may have to vote to approve the bailout deal, but German reception thus far has been positive. Finance Minister Schaeuble said the aid deal represents the German position and the deal is fair. Merkel ally and lawmaker Michelbach noted that Cyprus must fulfill all conditions to get aid.

Most of the initial jump to 1.3075 in EUR/USD seen after the aid announcement has been unwound over the European session, but the key 1.3000 line seems to now be providing support. Resistance may be provided at 1.3055, by the 38.2% retracement of the fall from the pair’s all time high to its all time low.

Meanwhile, the risk appetite created by the Cyprus deal may have been somewhat responsible for the Australian Dollar setting a new two-month high against the US Dollar at 1.0471 duing today’s European session.

In economic releases, the Italian consumer confidence index was reported at 85.2 in March, slightly below expectations and lower than the 86.0 index in February. UK BBA Loans for House Purchases declined to 30,506 in February. Neither release had significant effect on Forex markets.

As this writing is being published, Italy will sell 2014 bonds and 2018,2023 I/L bonds. Italian 10-year bond yields have declined 5.9 bps today and the benchmark bond price is now trading above the point where it was before the elections that led to the current political stalemate in Italy.