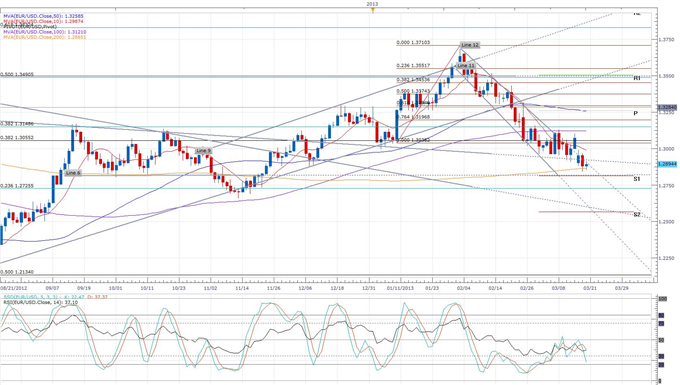 The Cyprus parliament smashed apart the proposal to place a levy on bank depositors in yesterday’s vote, and Euro traders are watching today as Cyprus leaders attempt to pick up the pieces from that failed proposal.

There now seems to be no clear preferred path for the Cyprus government to raise the required 5.8 billion Euros to unlock the Euro-zone’s 10 billion Euro bailout. The banks have remain closed since the usual banking holiday at the beginning of the week, to prevent people from transfering money out of their accounts, and it is unclear when the banks will open again.

Members of the ECB will meet today to discuss the possibility of cutting liquidity to the Cyprus banks, should the government fail to present a new proposal to raise the required cash. Austrian Finance Minister Fekter said today that Cyprus banks will not be able to open on Friday without the ECB liquidity. There has yet to be any significant talk from Euro-zone leaders on cutting the requirement for Cyprus to access the bailout, leading speculators to begin discussing the possibility of Cyprus leaving the Euro-zone.

Meanwhile, Cyprus Finance Minister Sarris is currently in Moscow meeting with his Russian counterpart Siluanov. There seems to be Russian interest in the Cyprus banking system, as many of its citizens hold deposits with Cypriot banks. In a break between talks, Sarris said that the first meeting was very constructive and honest, and further said that he will be in Moscow until they reach an agreement. There were some initial reports that Sarris will hold a press conference from Russia, but those reports were soon cancelled by the Cyprus embassy.

The Euro ran up about 40 points against the US Dollar to 1.2900 in the European Forex trading session, probably on positive speculation that Russia will come to Cyprus’s rescue with the near 6 billion Euros. The Euro fell below the key 1.3000 level over the weekend on the initial news of the Cyprus bank levy, but the Euro further fell yesterday following the parliamentary rejection of the levy, because apparently the prospect of Cyprus leaving the Euro scares single currency traders more than worries over the bank levy. A 4-month low at 1.2843 may now provide support for EUR/USD.

There is a lot of Pound event risk today from the BoE Minutes and Chancellor Osborne’s presentation of the 2013 budget to parliament.