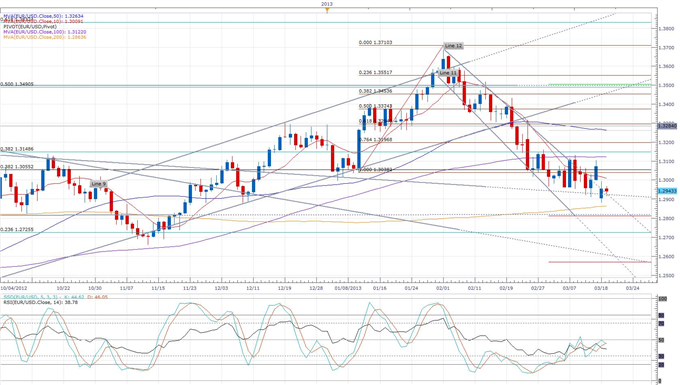 THE TAKEAWAY: ZEW survey for expectations rises to a near 3-year high -> Doubts rise that Cyprus parliament will vote on levies today -> Euro steady below 1.30

The Bundesbank predicted in February that the German economy will return to growth in Q1, following the 0.6% GDP decline in Q4 of 2012. The Bundesbank also lowered its 2013 growth forecast for 2103 to 0.4% in December. Signs of improved economic growth in the Euro-zone’s biggest economy are Euro positive.

The Euro temporarily rose above 1.2950 against the US Dollar in Forex trading following the ZEW release, however the pair quickly erased those gains as the single currency remains weighted down by uncertainty in Cyprus. Cyprus banks remained closed today and will also be closed tomorrow as the parliament has yet to approve the president’s proposal to impose levies on possibly every Cypriot bank account.

The Cyprus parliament was scheduled to vote today at 16:00 GMT, but parliament members have been telling news sources that they are unsure if the vote will take place today. The most recent local reports from Cyprus expect the final proposed tax rates to be 6.75% on accounts from 20K to 100K Euros, 9.9% on 100K to 500K, and 12.5% on accounts above 500K, while accounts below 20K won’t be taxed. Worries that contagion will cause depositors from around the Euro-zone to withdraw their cash or move it out of the area have prevented an increase in Euro buyers.

Meanwhile, there has been little remorse from Euro-zone leaders, who told the Cyprus government to raise 5.8 billion Euros to unlock a 10-billion Euro bailout. France Finance Minister Moscovici said there is no plan B for Cyprus.

Finally, BoJ Governor Shirakawa stepped down from his position today, a few weeks ahead of the end of his term. Before leaving, he said today that he sees a chance for Japan to end deflation, but said that he made the utmost effort to end it himself. Shirakawa further said that removing BoJ independence may hurt trust in the Yen.

In economic releases, UK inflation reached a new 9-month high, which was expected. However, an unexpectedly large rise in producer prices sent GBP/USD above 1.5100.