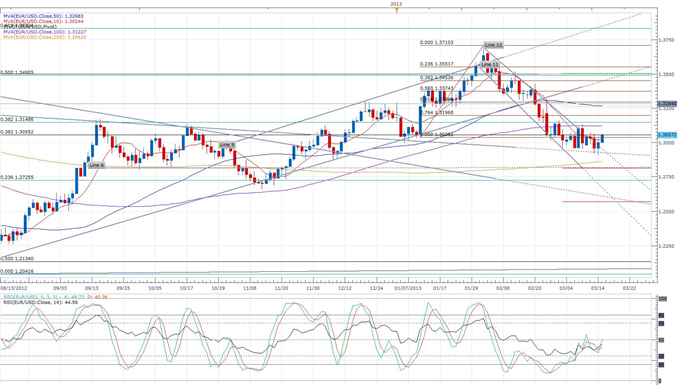 The ECB reported today that European banks will be repaying 0.385 billion Euros of the first 3-year LTRO payment and 6.432 billion of the second payment in the upcoming week. The repayment of the first loan is down from 1.336 billion last week, but the second loan payment is up from 2.894 billion Euros. The news had little impact on Euro trading in Forex markets.

The Euro and the Pound have both seen steady rises in today’s session continuing from yesterday’s inclines against the US Dollar. The rise in Pound may be a continued reaction to BoE Governor King’s comments that the Pound is properly valued and the BoE will not intervene in Sterling trading. The Euro may be higher due to expectations for the EU summit to produce solutions to either the Cyprus bailout or revised deficit target concerns, but that is only speculation, and the Euro incline may just be a technical reaction to the dip below 1.3000.

Regarding the second day of the summit, Finnish Finance Minister Urpilainen said earlier today that it’s hard to say if the Eurogroup will decide on a Cyprus bailout today. The European finance ministers will be meeting separately later today to further discuss the Cyprus bailout.

Euro-zone annual inflation for February was confirmed at 1.8%, which seemed to have little effect on Forex trading.

The Euro is currently trading slightly above 1.3050 against the US Dollar, and may see resistance by the 100-day resistance around 1.3123. Support could be provided by the key 1.3000 level.