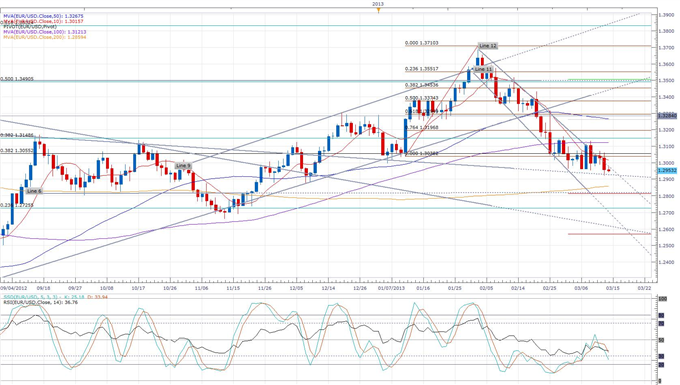 ECB Maintains Economic Recovery Forecast Ahead of the EU Summit

The European Central Bank released its monthly economic bulletin, saying there is a downside risk to the central bank’s economic outlook. However, the bulletin also said it sees a gradual recovery later in 2013, as contained inflation allows the ECB to remain accommodative, thereby reiterating Draghi’s comments from earlier in the month.

Following the ECB meeting earlier this month, President Draghi said he sees Europe’s economy experiencing worsening consumption and demand before the recovery later this year. The Euro-zone experienced five straight quarters of economic contraction ending with Q4, while inflation was reported at 1.8% for February, below the ECB’s target rate.

There was no significant reaction to the ECB bulletin, as it reflected a lot of what was already said by Draghi in his monthly press conference. The Euro has traded pretty steady over today’s European session, and dropped slightly closer to 1.2950 against the US Dollar in Forex markets. Support may be provided at 1.2933, by a long term downward trend line from December 2011. Resistance may be provided by the key 1.3000 level.

Also today, Spain held an unscheduled sale of long term debt. 2029, 2040, and 2041-bonds were sold for 803 million Euros. The 2029 bonds sold for an average yield of 5.22% versus a significantly higher 5.79% in February. Spanish benchmark 10-year bond yields have fallen about 60 points in secondary markets over the past month of trading.

Also released today, the Swiss National Bank maintained a 0.00% target interest rate and said it will continue to enforce the 1.20 Franc/Euro ceiling with the utmost determination. There was no significant Franc reaction to the announcement.

Later today, European Union leaders will begin their two day summit in Brussels, and Euro-zone leaders will also meet separately later today. The loosening of deficit targets on growth starved countries like France and Italy will be the major topic for talks, while a bailout for Cyprus will also be discussed.