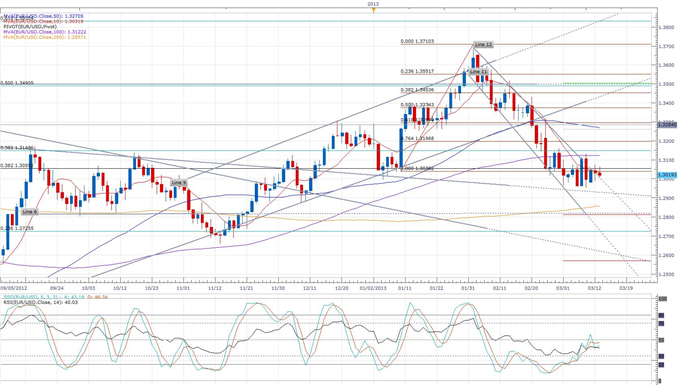 Production of durable consumer goods fell by 1.4% in January, while capital goods production fell 1.2%. Finland saw the largest industrial output decline at -4.1%, while Portugal saw the biggest increase over January at 3.5%.

The Euro-zone has seen five straight quarters of economic decline ending with a 0.6% GDP decline in Q4. The ECB predicted this month that there will be a 0.5% economic contraction in 2013. ECB President Draghi said that the Euro-zone will experience weak consumption and weak domestic demand in the near term. Therefore, today’s industrial production numbers also support those who say the decline in GDP output will continue in Q1.

However, the Euro did not react to the worse-than-expected release. EUR/USD continues to trade slightly above 1.3000 in Forex markets, a level which the pair has had trouble deviating from in the last 8 days of trading. 1.3000 may continue to provide psychological support to EUR/USD, andresistance may be provided at 1.3055, by the 38.2% Fibonacci retracement of the move from the pair’s all time high to its all time low.

Italy sold long-term bonds today for the first time since the Fitch downgrade last week. 3-year bonds were sold for 2.48% yield versus the 2.30% yield in February, showing a slight drop in bond prices since the downgrade. Italy also sold 2028 bonds, and floating 2017, 2018 bonds. The Euro showed only a minimal reaction to the drop in bond prices.

Bundesbank’s Weidmann continued speaking today following yesterday’s pessimistic comments. The ECB member said that the Euro will still be the currency of the Euro-zone in ten years, but he said that there is no end to the crisis in sight.

Earlier in the session, the US Dollar showed some temporary weakness, which sent EUR/USD up to 1.3060, before the weakness was unwound and the Euro fell back towards 1.3020 against the US Dollar.

Traders’ attention may now turn to the US retail sales for February, which will be released in just a few hours.