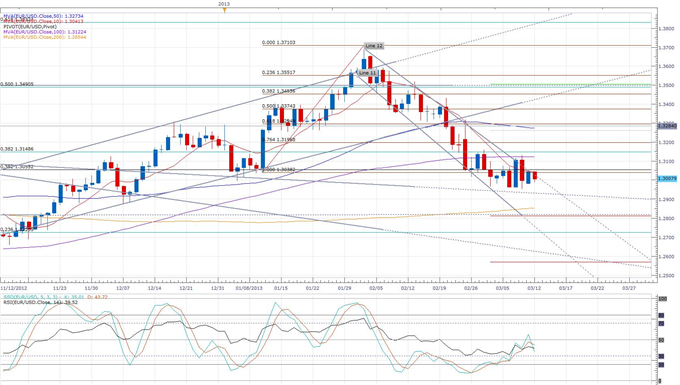 Is the Euro-zone seeing a slow recovery, or will issues like the political instability in Italy and struggles to meet the deficit target in France bring the area back into the thick of the crisis?

While it is this question that should be on the forefront on the mind of any Euro trader, we haven’t seen any significant developments on the question of a Euro-zone recovery since ECB’s Draghi’s not-as-dovish-as-expected comments from Thursday last week. The result of the multi-day quiet has been indecision whether the Euro will rise above or fall below the key 1.3000 line in trading against the US Dollar in Forex trading, and the indecision continued during today’s European trading session.

In the UK, just a few minutes after this writing is published, the UK industrial production and trade balance for January will be released.

In Japan, the Yen rose slightly from a 3-year low against the US Dollar set earlier in the session, after a DPJ lawmaker told reporters that the party will support Kuroda for BoJ governor and Nakaso for deputy governor, but the party will oppose Iwata for deputy governor. DPJ’s Sakurai later clarified that the upcoming BoJ governor term will only last until the middle of April, and the party reserves the right to oppose Kuroda’s re-nomination after a month in office.

The Euro continues to trade slightly above 1.3000 against the US Dollar at the time of this writing. Support might be provided by the key 1.3000 line, andresistance may be provided at 1.3055, by the 38.2% Fibonacci retracement of the move from the pair’s all time high to its all time low.