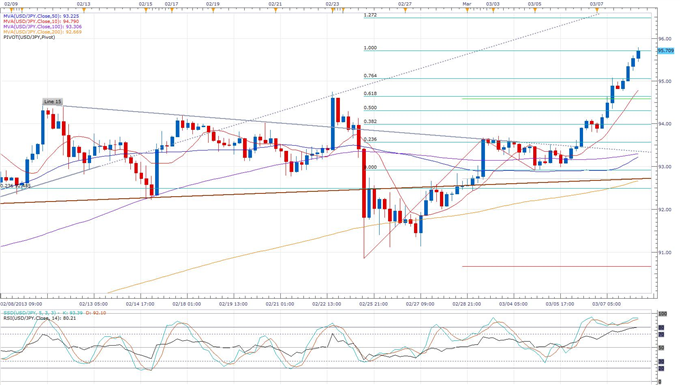 Yen Slips to a New Low During a Quiet European Session

Despite a lack of significant news stories, a risk-on sentiment could be felt throughout the currency markets in today’s European session. Sudden 30 to 40 point gains were seen in risk correlated currencies like EUR/USD, GBP/USD, AUD/USD, and JPY/USD, and European equities are trading significantly higher in today’s session.

The economic releases during today’s session also had little effect on Forex markets. German industrial production was flat in January when compared to the previous month, disappointing expectations for a 0.4% rise in production. In the UK, the GFK/BoE survey of inflation outlooks among consumers showed expectations for 3.6% inflation over the next twelve month, which was slightly higher than the 3.5% expectation seen in the November survey. Neither release had significant effect on trading.

In Switzerland, annual inflation was reported at -0.3% for the second consecutive month in February. The release had little effect on Franc trading.

The ECB announced today that 4.23 billion Euros of the two 3-year LTRO payments will be repaid by European banks next week. 229 billion Euros have now been paid of the 3-year loans given out over a year ago, making up 22% of the total loans. The Euro did not have any significant reaction to the announcement.

The Yen continued to weaken against the US Dollar and set a new 3.5-year high around 95.75 during the European session. USD/JPY first started its 80 point rally after an overnight release of the Chinese trade balance. Resistance might now be seen at the next high around 97.78, and support could be provided by the key 95.00 figure.

In the North American session, the US Non-Farm Payrolls and Unemployment Rate will be released at 13:30 GMT. Look at Currency Strategist Ilya Spivak’s report here on how the employment numbers could affect Forex markets.