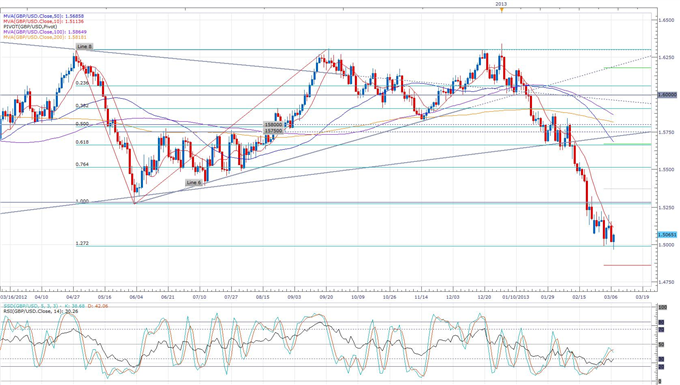 Pound Jumps as BoE Declines to Add to Stimulus

The Pound rocketed fifty points higher against the US Dollar, following news that the Bank of England decided to keep its asset purchase target at 375 billion Pounds and its interest rate at 0.50%. In July of 2012, the BoE raised its asset purchase target by 50 billion Pounds to where it sits now, and the interest rate has been kept at the current level since March of 2009.

We found out in the minutes from the February meeting that 3 of the Monetary Policy Committee members voted in favor of increasing stimulus, including BoE Governor King. King has said previously that the UK’s higher than targeted inflation must be looked at in the context of a struggling economy, and that the quantitative easing may be raised above 375 billion if conditions deem it necessary. Yet despite King’s dovish comments, not enough BoE members voted to raise stimulus in the March meeting. Raising monetary stimulus is considered Pound negative.

There was a minority opinion among Bloomberg surveyed analysts that the BoE would raise stimulus, which is why GBP/USD jumped fifty points on confirmation of the majority expectation for no additional stimulus. GBP/USD is currently trading around 1.5060, and may see resistance by the broken support line around 1.5280. The pair may see support by the key 1.5000 level.

Coming up later, at 12:45 GMT, the ECB will announce its rate decision following the March meeting. If there is no change in ECB rates, then Euro traders will still watch ECB President Draghi’s press conference at 13:30 for clues on future policy or the announcement of other monetary tools to be put in place by the European Central Bank. For a further analysis ahead of the ECB announcement, look at Currency Strategist Ilya Spivak’s report here.

Euro saw some strength earlier in the session, following a sale of Spanish bonds. The sale brought in 5.03 billion Euros versus a maximum target of 5.0 billion Euros. The yield on 10-year bonds fell to 4.92% in the sale from 5.20% in the February sale. The Euro rose to 1.3040 against the US Dollar following news of the sale.

Also announced today, Greek unemployment fell to 26.4% (seasonally adjusted) in December, following the revised 26.6% unemployment rate in November. In Italy, former prime minister and center-right politician Berlusconi was sentenced to a year in prison in a wiretapping case. There was no effect from the story on Euro trading.

In economic releases, German factory orders disappointed expectations and fell 1.9% (seasonally adjusted) over January. However, the release had no impact on Euro trading, as traders remained focus on the ECB release. French unemployment rose to 10.6% in Q4, slightly higher than expected, and Swiss unemployment remained at 3.4% in February. Neither release had significant impact on Forex trading.